In our current world of heavyweight boxing, where the decorous and educated Klitschko brothers rule has turned off many — especially in America — who are looking for a little more Mike Tyson-like fire in the champion(s), one certainly can’t blame Anglo-Irish hopeful (and Mike Tyson namesake) Tyson Fury for not giving it his best shot.

The still youthful (25 years old), 6′ 9″ giant Fury has spent much of the year on a social media tear, ridiculing domestic rivals like “the plumber from Liverpool” David Price, and even showing zero respect for the currrent heavyweight champions, with Wladimir Klitschko especially coming under Fury fire as a supposed “pussy” for refusing to fight him.

Ironically, the Fury-ous one’s latest target is his fellow Brit David “Hayemaker” Haye, the last guy who tried on the (for him lucrative) big-mouthed troublemaker role in the heavyweight division, who now rather ironically finds himself cast as the good guy, with Fury so far out-talking and out obnoxious-ing the Hayemaker at every turn.

While the veteran Haye is the favorite in their upcoming match (set for February 8 in Manchester), Fury is convinced that, given Haye’s tepid performances against other giant heavyweights (a very questionable win over the now retired Nikolai Valuev; an uncompetitive loss to Wladimir Klitschko), he’s “running scared” after suddenly postponing their scheduled fight due to a sparring accident.

Fury blames Haye for messing him around and thinks after getting whatever publicity he can out of Fury, the Hayemaker will move on. 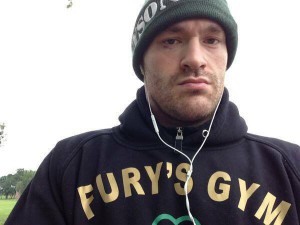 Tyson Fury: not waiting around for Haye

“I have gone backwards in the rankings through the way Haye’s behaved. It has been catastrophic for me,” Fury fumes.

“I have been diligently working my way forward but, because of this [fight] delay, things have changed and I blame Haye for that.”

This time, Fury says he isn’t going to lose another fight date due to an evasive Haye’s machinations. He’s got a “back-up plan.”

“I honestly believe he will call the fight off once again,” Fury explains.

“He is dodgy – but this time we have already fixed up somebody to be on stand-by.

“I will be going back in heavy training for the fight in a couple of weeks but I am not going to lose out on having a fight this time around.

“We will have another opponent ready to step into the ring.”

Fury doesn’t mention any names, but figures he has to fight on February 8 to avoid further damage to his career.

And just in case you forgot, Fury is still ready to proclaim his superiority over every other heavyweight, past, present, and future.

“I am not taking any chances. I will be fighting in February and I know what the outcome will be,” Fury boasts.

“I know how good I am and I don’t believe there’s a man on earth who can beat me.

“I have Irish blood and an English heart – there’s nothing I’m afraid of. I can be just so dangerous, because it’s all or nothing. Haye will find out just how dangerous when we finally get in the ring together.”

If they ever do, that is.

Previous UK Heavyweight David Price Hooks Up With Notorious Manager and Trainer Adam Booth
Next Is Timothy Bradley the 3rd best fighter in the world?