Andrade Eager To Face Sulecki In Front Of Hometown Crowd

“Fighting at home,” says WBO world middleweight titlist Demetrius Andrade, “is really exciting.” Andrade, a native of Rhode Island, will be having a homecoming fight this weekend, when he faces Maciej Sulecki at Providence’s Dunkin Donuts Center on Saturday night. “In a way it’s more exciting for the fans in Providence,” says Andrade, “as I’ve fought all over the world already. So, to give my hometown the chance to watch me display my skills, talent, work ethic is going to be great for them – they’re going to see greatness from one of their own. I’ve got two full passports from travelling the world and it’s a privilege to do that, to see the world and learn and gain experience, so to come home for such a big fight is great.” 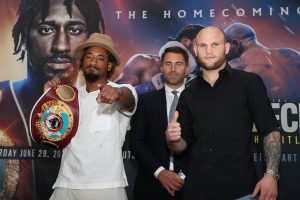 At 20-0, Andrade is regarded as one of the most skilled, if not the single most skilled, fighter in the very competitive middleweight division. The fact that the undefeated 31-year-old fights on DAZN, the same streaming service that broadcasts the fights of Canelo Alvarez, Gennady Golovkin, Daniel Jacobs, and others, indicates that the future can be quite bright and lucrative indeed – provided, of course, that he get past the 28-1 Sulecki.

“I’m an Olympian and a two-weight World champion,” says Andrade, “but that’s not enough because there’s a lot of people that haven’t seen my talent displayed in the mainstream like some other fighters, like Canelo Alvarez, as Golden Boy did a great job moving him and GGG had great promotion too, but they’re not the greatest talents out there, they are just the most popular. It’s called prize fighting and I am looking to capitalize on that, with the capital.” Although his career has seen its share of quiet years (he only fought once a year between 2013 and 2017), Andrade is eager to now make is presence felt.

“I’ve got air in me now,” he says. “Should I have been the guy like Canelo with the machine behind him? Yeah, I could’ve been that, but it didn’t fall that way for me, but now I’m here. I kept my focus in mind, body and soul and continued to grind, because anyone else, this boxing game is hard and people give up, especially when there’s no money coming in as you have to pay the bills.”

“I’ve been through the politics of boxing and found my way out of it,” he continues, “just like I’ve found my way to win in every fight. Being who I am and having the team around me has got me to the point where I’m headlining the Dunk as an undefeated World champion.