It appears as though Artur Beterbiev (16-0, 16 KOs) has his next opponent currently lined up.

The unified light heavyweight champion has officially been ordered by Mauricio Sulaiman, President of the WBC sanctioning body, to take on Marcus Browne. The two sides will now have approximately 30 days to work out a deal before a purse bid is ordered on September 17th.

Browne (24-1, 16 KOs), who currently occupies the number one position in the WBC rankings, has battled inactivity as of late. After picking up the biggest win of his career against Badou Jack in January of 2019, Browne attempted to defeat another titleholder. This time, in the form of multiple division champion, Jean Pascal. The two would swap fists in early August of 2019.

With the former Olympian outboxing his man in the first few rounds, Pascal ducked low, clenched his fist, and fired an overhand right that floored Browne. Clearly stunned, Browne managed to climb back to his feet before hitting the deck twice more in the seventh.

Their contest would come to an abrupt ending in the following round due to a severe cut suffered by Browne due to an accidental headbutt. With more than three rounds of action, their contest went to the judges’ scorecards for a decision. Due to the three knockdowns scored by Pascal, Browne suffered the first defeat of his career as all three judges scored it 75-74 in favor of Pascal.

He’s since bounced back from that lone defeat. In his return to action earlier this year, Browne outpointed journeymen Denis Grachev. While he’s shown tremendous promise, a matchup against Beterbiev figures to be the most difficult of his career by far.

The hard-hitting Russian native unified light heavyweight titles against Oleksandr Gvozdyk in October of 2019. He’s recently gone on to defend those titles with relative ease earlier this year in mid-March, dropping and ultimately stopping Adam Deines in the 10th round.

Previous Derrick James: “I’m Happy For [Yordenis] Ugas, This Is His Opportunity To Be Great, He’s A Phenomenal Fighter”
Next Shawn Porter On Pacquiao-Ugas: “I Think We’re Going To Get A Lot Of Action”

Shawn Porter On Pacquiao-Ugas: “I Think We’re Going To Get A Lot Of Action”

Derrick James: “I’m Happy For [Yordenis] Ugas, This Is His Opportunity To Be Great, He’s A Phenomenal Fighter” 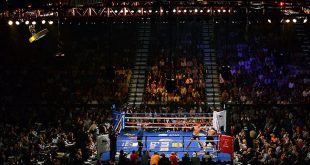 The Psychology Of Poor Judging