Fame became John Lawrence Sullivan. Born in the 1850s in the Boston area to Irish parents, Sullivan wasn’t the type of person one would expect to go on to great things. To be sure, the Irish weren’t taken to kindly back then. And an Irishman who was good with his fists might have well have been laughed or shrieked out of polite society. Sullivan, however, was a self promoter. Even more importantly, the young man could back up his words with action. And so, an obscure product of Massachusetts would go on to become America’s first great sports celebrity. Names like Ali, Jordan, Ruth, Bryant and countless others have surely followed after him, but Sullivan looks to have been the original. 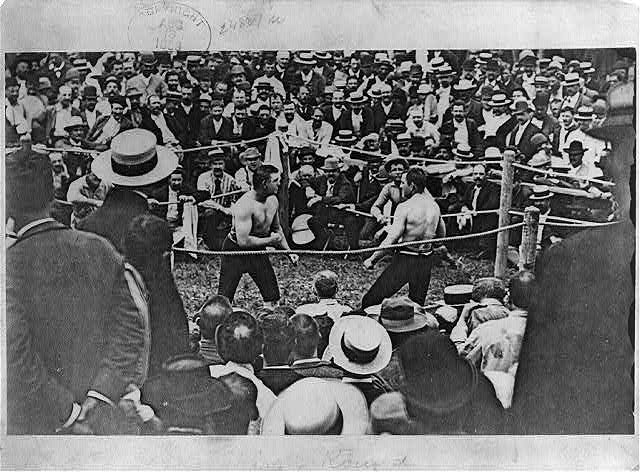 First off, Sullivan knew his craft, which was boxing. Here was a man who engaged in bare knuckle combat and laid out opponent after opponent, year in and year out, in a sport which was essentially illegal at the time. It was a hard way to make a living, true, but Sullivan was good at it. He was also good – scratch that, he was great – at making his presence felt. To be sure, Sullivan let the world know, whether through tough talk, or through tough looking photographs, that he was the roughest son of a bitch on earth. Again, the man was a forerunner. For Sullivan started a tradition that men like Jack Johnson, Ali and, less impressively, Adrien Broner would successfully follow years afterwards.

What’s more – Sullivan was willing to prove what a hard case he was in the ring. And, after he knocked out fellow hard case Paddy Ryan in Mississippi in 1879, the Boston Strong Boy, as Sullivan was called, became widely renowned as Heavyweight Champion of the World. The man toured. He offered money to anyone who could knock him out (he always won). He went to Europe and fought there. Oh, and he drank. And drank. And drank.

Things eventually got so bad that it’s said a priest was once called to Sullivan’s bedside. After a point, it became clear the man was no longer at his best.

What’s more, there was tough competition on the horizon. Jake Kilrain was a lean scrapper, who – like Sullivan – was a product of the Boston area. Kilrain was also known as a terrific wrestler, which was important in the era of bare knuckle fighting, as competitors were allowed to toss each other to the ground. Newspaper man Richard K Fox, an individual who was no fan of Sullivan’s, subsequently decided that Kilrain, not Sullivan, was the true heavyweight champ. Needless to say, a fight was arranged that would settle matters.

Sullivan, however, was far from fighting shape. To the man’s credit, though, he was smart enough to take Kilrain seriously. Therefore, he employed the help of William Muldoon, an early version of what we today would call a strength and conditioning coach. Heading to Muldoon’s New York farm, Sullivan kept from going on benders, ate wisely, and walked long distances while also engaging in such exercises as wrestling with Muldoon and bag work. In short, the man got himself into fighting shape. The training would prove to be well needed.

The two men finally met on July 8th, 1889 in Missouri, at a farm in a town called Richburg. Being under the London Prize Ring rules, the bout was fought with bare knuckles. The temperature that day was over one hundred degrees. Oh, and the fight lasted seventy-six rounds and ran over two hours from start to finish. It was a brutal affair indeed, with both men essentially becoming endurance incarnate.

According to the International Boxing Hall of Fame, Sullivan – more the striker of the two – took Kilrain down twice in the beginning, only to be dropped by his game opponent in the third. From there on out, however, it was all Sullivan. To be sure, the Boston Strong Boy was able to land on his opponent, and that proved to be all the difference. Kilrain, however, was not a man to give up – not, apparently, under any circumstances. To be sure, the bout turned into a grotesque affair, Sullivan got a cut on his foot. He also apparently got on top of Kilrain and tried choking him. What’s more, Sullivan is said to have absorbed whiskey that had been mixed with tea in between rounds.

Indeed, at one point, we’re told that Sullivan threw up, only to claim that he had merely vomited tea while maintaining the whiskey in his system. Such, it seems, was the scene on that sweltering July day. Ultimately, the bout was stopped by Kilrain’s corner between the 76th and 77th rounds, after a doctor in the audience reportedly made it clear that he believed Kilrain would die if he were to continue fighting. Needless to say, Kilrain was said to be quite displeased with his camps’ decision. Thus ended what’s considered the last of the major bare knuckle matches.

Yet, while boxing was still largely an illegal affair nationwide, the Sullivan-Kilrain fight was indeed a big deal. Lots of people showed up to that farm in Missouri. Lots of money changed hands. The fight had generated significant publicity, as well. To be sure, famed reporter Nelly Bly had interviewed Sullivan in training camp beforehand. Whether the powers that be liked it or not, boxing had become a force to be reckoned with. Things, however, were going to change for the sport. Sullivan-Kilrain was nothing if not an insanely harsh and, yes, dangerous affair.

Boxing, in short, would need to become a true sport and not a barbaric enterprise if it were ever to be embraced by American society in general. Better rules would have to be regularly employed. Matters like fighter safety would have to be of greater concern. Boxing could still be tough and grueling, but it would have to be more than two men brutalizing each other if it were to become at all respectable…or technical. Sullivan may have been in his exhausted glory after the Kilrain fight…but it would be the final shining moment of the man’s career, as well as of his raw style of boxing.