After IBF light heavyweight champion and future Hall-of-Famer Bernard “The Executioner” Hopkins (53-6-2, 32 KO) once again defied Father Time with his win over Tavoris Cloud last month, he resumed his training regimen in hopes of another big named opponent in which he could add to his resume. 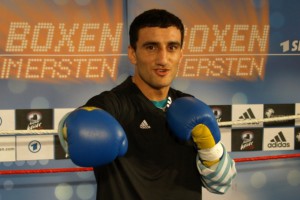 But much to Hopkins’ dismay, two days ago it was announced that the mandatory challenger for his IBF title is Karo Murat, and the two are expected to meet in the ring on July 27 at the Barclays Center in Brooklyn, New York.

Although Murat is not Hopkins’ first choice of opponents at this stage in his career, he understands that in order to keep the belt, he must fight who they put in front of him.

“It’s an obligation I have to do now,” Hopkins told ESPN.com. “If there was a better option, maybe I’d do it. But there is no real option that’s better right now with all the other [top] guys fighting other fights right now. So there’s no other better option right now financially or historically than doing this fight and getting it out of the way, and at least you don’t get stripped of the title. But I got bigger fish to fry after I execute this guy. After this I want a superfight.” 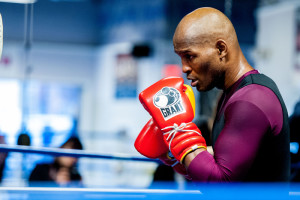 Murat (25-1-1) is more than anxious for this opportunity to throw hands with the living legend, and although he will be coming into the ring a heavy underdog against the former middleweight king, he believes his power will lead him to victory. To date, Murat’s toughest and most prominent opponent was Nathan Cleverly, who he lost to via 10th round KO in 2010.

“I was so excited when I first found out about this,” said Murat. “We have been testing my punching power on Thursday and the good news gave me some extra motivation, which showed in the results afterwards. Hopkins proved that he doesn’t belong to the old guard. I will do everything I can to be in the best shape possible.”

With his recent win over Tavoris Cloud, Hopkins continued to make history at the age of 48, showing he still had more than a little left in the gas tank to bang with the division’s top dogs, adding to his legacy.

Ideally for Hopkins, following a ‘W’ over Murat would be a rematch against Chad Dawson, whom he fought to a No Contest in 2011 and lost a Majority Decision in 2012. Dawson is scheduled to fight Adonis Stevenson to defend his WBC light heavyweight title June 8.

“From what I’ve seen of Murat, he’s a durable guy and a ‘B’ fighter, but I have to look at him like he’s an ‘A’ fighter,” Hopkins continued. “He fought Cleverly and he got some experience. He’s rough and tough, so you got to come up with a game plan, especially at age 48. People want to tune in and see, ‘Is tonight the night Bernard Hopkins gets old?’”

They say in boxing fighters can get old in the middle of a round, yet Bernard Hopkins continues to disprove that fact. He has shown no signs of slowing down, and July 27 will look to add Murat’s name to a very extensive list of victims of The Executioner.