If someone offered you $10 million to learn a foreign language, would you buckle down and learn it? You bet your sweet lottery losses you would. So would I. who wouldn’t? Whatever it takes, right? 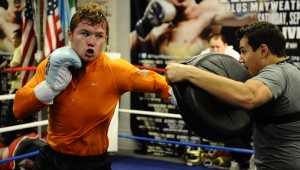 So what’s stopping Saul “Canelo” Alvarez? (next scheduled outing against Sugar Shane Mosley May 5, on the Floyd Mayweather-Miguel Cotto undercard) This is a handsome, redheaded ethnic kid who packs a George Foreman punch in a junior middleweight body. Already quite formidable, he’s improving his skills at a remarkably rapid rate. Corporations would already be scrambling for his endorsements of athletic shoes, power drinks, and automobiles if he could just precede it with two or three engaging English-language conversations on Leno and Letterman.

That $10 million figure is conservative. According to Sports Illustrated, Oscar De La Hoya took in $2 million in endorsement money in 2004 and Tiger Woods came away with $70 million. I chose that year because it was a relatively pristine, pre-scandals period. Although Oscar registered his fourth loss (to Bernard Hopkins) that year and tales of drunkenness and related indiscretions circulated freely, photos of him in drag had yet to hit the Web. As for Tiger, his wife hadn’t yet chased him into the cab of his SUV with a golf club. And a battalion of bleach-blonde waitresses with big bazoomas had yet to bury Tiger’s gold mine of endorsements under the weight of their sleazy, basically identical adulterous stories.

Canelo, 39-0 (29), is way ahead of where Oscar was at his age. He’s got similar charisma and packs superior power. But the truth is, being a star in this global village means your star must shine bright in the U.S. — a circumstance Manny Pacquiao turned to his advantage in a relatively short time. He had the guts to not only learn the lingo, but to engage in banter with a pleased Larry Merchant after pounding his latest opponents into the canvas. He also easily conquered American late-night talk shows.

How fast did Paquiao’s career accelerate? When some friends and I journeyed down to Freddie Roach’s Wildcard Gym in Los Angeles in June 2004, it was to watch James Toney spar. Pacquiao, who also showed up that day, had just started training there and though it seems hard to believe now, wasn’t as big a name as Toney. He had yet to learn much English. His poor command of the language had much to do with the fact that for a while he had promotional contracts with both Top Rank and Golden Boy (Top Rank, run by Harvard Law grad Bob Arum, easily elbowed Golden Boy into a much smaller supporting role).

Meanwhile, after his fights on U.S. TV, everything in Canelo’s interview still must be translated both ways. It creates a distance between him and the U.S. public that’s startlingly intrusive. That might not sound fair, but endorsement money doesn’t know what’s fair or unfair. It follows a cold, marketplace logic. People Canelo’s age all around the world are breaking their backs to learn what is now the unrivaled dominant language of the planet. Mexican pilots landing their aircraft in France’s Charles De Gaulle Airport converse with traffic controllers in English.

Pacquiao’s primary language tool was to live near the Wild Card for weeks at a time. He was not afraid to try out his English in the gym and as he circulated around the neighborhood. Congressman Manny helps peddle office equipment, athletic gear, and fresh vegetables. The fame from the advertisements spills over into the fight business and ratchets up purse money.

Golden Boy Promotions may be lagging in promoting Canelo because it had already tried to pass the wand of Oscar’s stardome over to Victor Ortiz, but the company’s unfortunate matchmaking dealt that concept a serious, perhaps fatal blow. It seems to be having trouble switching gears into Canelo mode. But what’s Canelo waiting for? He can’t train every waking moment. There’s time for language practice. He should do what he has to do with or without Golden Boy’s help.