After losing his WBC super welterweight title to Tony Harrison by unanimous decision last December, Jermell Charlo was eager to regain both his title and his winning ways. A rematch was scheduled, but Harrison had to pull out due to an injury. Charlo indicated he didn’t buy Harrison’s reason for stepping away from the bout, but the Houston native ended up impressing in his return fight regardless. For the 31-1 Charlo faced the 28-3 Jorge Cota on Sunday at the Mandalay Bay Events Center in Las Vegas before PBC cameras in a battle that was aired live on Fox. Needless to say, Charlo made a distinct point by destroying Cota in the third round. 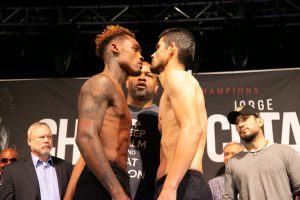 Although widely expected to win the fight, Charlo ended matters in disturbing fashion by laying Cota out on his back with a picture perfect straight right hand. Cota, who had previously been down only moments earlier, could be seen by FOX cameras lying under the ropes with his eyes wide open, completely out of commission. Referee Jay Nady didn’t even bother with a count, waving the fight off as soon as Cota hit the mat for the second time. There was criticism of Nady after for the bout for letting Cota resume fighting immediately after the first knockdown.

In truth, Cota did well for himself in the early portion of the very quick match. His awkward style kept Charlo from steamrolling him right at the bell and the judges even awarded Cota the opening round on the cards. Still, the man ended up being no match for Charlo, who merely had to figure out Cota’s style before finishing the southpaw in devastating fashion. Cota, who had last fought in April, suffered his second loss in a row. WBC champ Harrison watched the proceedings in person.

Earlier on in the evening, Guillermo Rigondeaux, who was once ranked high on the pound for pound list, returned after a long absence from the ring to stop Julio Ceja in the eighth round. The super bantamweight, who was last seen quitting on his stool against Vasyl Lomachenko back in 2017 (in what was the fighter’s only loss), had long ago earned himself a reputation as a “boring” fighter. Rigondeaux threw that reputation out the window on Sunday, engaging in a fan friendly war, and earning his 19th win the hard way. The game Ceja entered the ring with a record of 32-3. The highly skilled Rigondeaux ended up handing the Mexican fighter his second loss in a row.