David Haye vs Tony Bellew? There Is Only One Winner I’m Afraid

David Haye vs Tony Bellew? There Is Only One Winner I’m Afraid

Hats off to Tony Bellew. No, really. His camp has been extremely smart and effective in the way that they’ve redefined him as a fighter, and then subsequently by moving him up to Cruiserweight after the humiliating defeat he suffered at the hands of Adonis Stevenson in Quebec, Canada, back in November 2013. Almost 3 years later, and after avenging his only other loss to Nathan Cleverly before going on to win the WBC Cruiserweight title (his first), Bellew is now in a position to make a serious name for himself, as well as some serious cash with a potential match up against David ‘Haymaker’ Haye now in the pipeline. 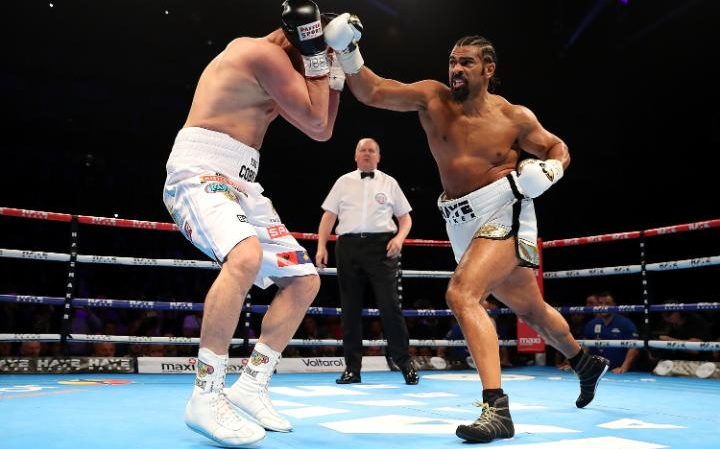 At present, Bellew is on an 8 fight undefeated streak where 6 of those victories have come by a way of knockout. Credit to Bellew, his career record at (28-2-1) and his recent stunning defence against BJ Flores make him look like an extremely solid bet going forward. At 33 though, he, like David Haye (36), is coming to the latter stages of his career. Still, that isn’t to say that neither of them could defy the laws of physics, reinvent their styles and become a Bernard Hopkins or an Evander Holyfield.

“I’m not going to go back down to a less-glamorous division than the one I’m in now for a loud-mouthed guy like him,” said Haye when asked about the possibility of fighting Bellew in the future. However, Bellew would much rather face Haye at cruiserweight, despite his promoter Eddie Hearn believing that if the right money is on the table then Bellew would step up no doubt. It doesn’t surprise me to here Hearn talk in such a way, particularly as both of these men have been longing for a big pay day for quite some time. Bellew did, however, manage to sell out Goodison Park in Liverpool earlier on this year when he emphatically knocked out Illungu Makabu after 3 rounds for his current WBC world title.

Regardless of the weight issue, the fight is still undoubtedly going to happen. Firstly, Haye is yet to name an opponent for his next match and with Shannon Briggs chasing him halfway across the country, to no great avail it must be said, it would appear obvious that he has been waiting for an opportunity like Bellew to come along. After his last two mediocre showdowns, where he fought opponents that nobody had ever even heard of, it would be fair to assume Haye’s loyal fans are long overdue a decent fight with a credible opponent. “A proper David Haye comeback,” some would be quick to add.

Secondly, can either of them realistically make better money anywhere else at this current moment in time? For David Haye, possibly. For Tony Bellew, no. In short, neither Cruiserweight champions Lebedev (WBA & IBF champion) and Usyk (WBO champion) hold big a enough name to be thrown into a paper view fight with Bellew. Well, maybe to a certain extent they do but not quite to the numbers that a fight with Haye would garner. We love an all-British affair over here!

For Haye, there are evidently bigger fights out there, but it seems apparent that he doesn’t believe he is ready for them just quite yet. In Haye’s mind, he knows that one more loss to a good opponent is going to be curtains for him. If he fights and beats Bellew, that sustains his career for another 6 months and keeps people guessing about his ability. This may not do him much in the divisional rankings, but in terms of stock, absolutely. Haye could have fought Wilder, Joshua, Ortiz, Browne or even the up and coming undefeated New Zealander, Joseph Parker by now if he had sought after those opportunities. However, he has been very steady. Maybe he shouldn’t be fighting, after all, he did say the Dr’s told him his shoulder was too bad to fight with after he bailed on, what were, two eagerly anticipated Tyson Fury fights.

Thirdly, and most crucially, the panache and intuition of Match Room promoter Eddie Hearn mean that he especially is definitely not going to be the one to pass up on such an opportunity. So much so, in fact, that he has already “opportunistically” booked March 4th, 2017 as a Sky Box Office date and claims Bellew-Haye would be a huge fight. Talking to the mirror.co.uk Hearn said: “Haye will be driving home [after the Bellew fight]maybe thinking ‘that’s a big fight’ as he looks on Twitter after what happened tonight, but he may want a belt instead. It would do monster business on pay-per-view. I think Tony would do it at heavyweight. I think he would look at fighting Haye rather than ‘I’ll move up and be a two-weight world champion’.” From this perspective it looks like Eddie has got all his angles covered, it will just be down to Haye’s team getting together, agreeing on figures and signing the deal that’s put in front of them.

The one thing that does throw the potential fight into doubt though is the discarded Tyson Fury’s belts after he was taken ill last week, and subsequently suspended following his cocaine shame. With Haye ranking rather highly on one of those divisional charts, there is a likelihood he may be placed in an eliminator for a future match up regarding one of the world title belts.

Back to last Saturday night, just before he got slightly over-excited in his victorious mode and started haranguing Haye who was stood at Ringside, Bellew actually produced a pretty good performance that many thought he wasn’t actually capable of. He wanted to make sure that a lot of critics and myself alike knew that he meant business. With almost a stone the difference between himself and Haye, the onus is going to be on Bellew to get into the better physical shape, as Haye will undoubtedly be the heaviest and hardest opponent he has ever before thought. With Bellew undeniably being slower and slightly less powerful than Haye, it may be up to him to find a way of bulking efficiently. Haye has much more class, experience and technique so will easily pick him off for 12 rounds if needs be.

The best way for Bellew to approach the fight with Haye will most likely have to start on the investment in camp and sparring partners. It’s an old cliché that ‘figths are won and lost in camps’ so on that advice if Bellew can get the right men in, then this will most definitely play to his advantage come that assumed fight night which is now well and truly looking likely. “I could probably beat Bellew with one punch,” said Haye, who had at first praised Bellew’s performance in the post-fight Sky interview. “I’m a heavyweight and when I hit him he will stay hit. He has no idea and he thinks that being a proper heavyweight is just about putting on a few pounds.” Haye would not be able to safely lose enough weight to fight for his old title at under 200 pounds, and that would mean Bellew coming up in weight, which only adds to Haye’s natural advantages. Only time will tell of course.

So, until that date, we shall have to wait to see what the stipulations are, where the fight is going to be and in what kind of shape they are both in come fight night. I think Haye would most likely punish him in the middle to later rounds, before going on to claim a TKO or Knockout in the closing rounds. Bellew will be most dangerous early on, as he has proved in his last two fights. It won’t be a repeat of the Chisora fight for Haye, though, and that is because largely Bellew is much more defiant, has similar height and a similar reach to that of Haye. He should be able to jab effectively and make Haye work for the victory. Nevertheless, with Haye not having really fought a “competitive” fight for (what will be) over 4 years at the time of this assumed fight, I think it is safe to say Bellew has at least some chance.

Previous Manny Pacquiao – The Lion In Winter
Next Are We Not Entertained?