Floyd Mayweather Has Potential to Claim “Greatest of All Time”

Allow me preface this by clarifying that this is not another “Floyd needs to fight Manny” piece- let it go, people. Please, for the purpose of this reading, suspend reality and imagine a non-Manny universe.

Secondly, full credit to Floyd Mayweather for making the Saul Alvarez fight come to fruition. The redheaded Mexican has looked superlative in his undefeated campaign (42-0-1) and truly has earned his right to battle against the best in the business. This is the best fight out there for Mayweather and for boxing right now. The beauty of this incredible match-up is that there is a rich landscape robust with numerous exciting opponents out there after this bout as well that will further thrill the boxing universe. 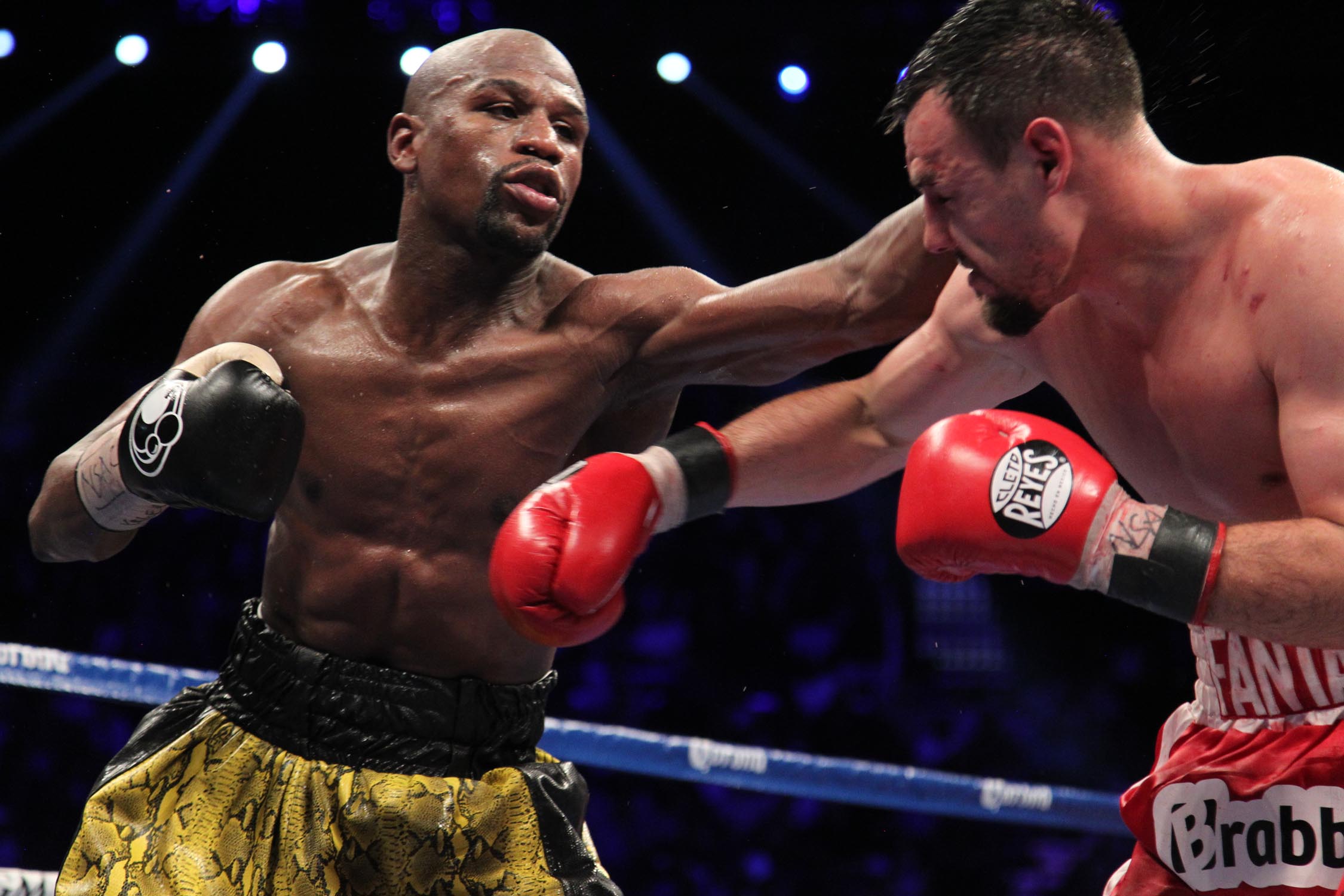 This also holds the potential to be the impetus for Floyd to embark on a journey towards retirement that will shake off the stigma that he is a protected fighter who takes soft fights and avoids the sharks. Floyd has the chance to forever silence critics and to etch his name in boxing lore as arguably the best of all time! The opportunities await him amongst the depth of formidable talent in and around the 147 division.

The high level of talent waiting in the wings to knock the “0” from the long time pound-for-pound king affords Money a wonderful chance to leave boxing with an impeccable resume and will categorically mitigate any claims about his alleged penchant in the past for hand-picking soft challenges (Henry Bruseles, Victor Ortiz, Shamba Mitchell, Robert Guerrero et al). He has five remaining fights left on his lucrative contract with Showtime and the following opportunities to end his illustrious career as the best there ever was.

In the co-main event of the Mayweather-Canelo classic, the electric Lucas Matthysse will battle undefeated Danny Garcia for 140 pound supremacy. The highly favoured Matthysse has knocked down every opponent he has ever faced. His 34-2 (32 KOs) record makes him the “Bogey-man of Boxing” scaring everyone and enthralling Johnny Public. His lone two losses were highly controversial and with a win over Garcia, he will be the undisputed champ in boxing’s deepest division, 140 pounds.

His recent destruction of the gritty, determined, Lamont Peterson made him a legit threat to dethrone the king. Should he impressively defeat Garcia, he would make an obvious choice to be Floyd’s next opponent and would prove to the world that “Money” takes on the best and his legacy would be further enhanced with a win over the likes of the Argentinean killer, Lucas.

Floyd attracts naysayers who look to tarnish his achievements. They might say that Lucas is a 140 pound fighter and Floyd is a 154 champ fighting Canelo at 152. Well, Floyd is not a natural 154 pound fighter and usually comes in under weight. On fight night, there would be minimal difference in weight between Matthysse and Money-May.

Floyd weighed in at 146 with a 147 limit against Guerrero and 151 against Cotto with a 154 limit. This should assuage concerns that Floyd possesses a significant size advantage against Lucas in a 147 pound contest.

There is little validity in criticizing Floyd, a former Super Featherweight King, in fighting a 140 pound champ at 147 especially after just testing Alvarez, who is the 154 champ. This would be a fantastic fight that could pique the interests of all sport fans. The world’s best human verses the “Bogey-man” is compelling drama and would elicit fervent excitement from all boxing aficionados. It would also be the first time since he rematched Castillo in 2002 that Floyd faced tough back-to-back challengers.

The world is quickly falling in love with Gennady Gennadyevich Golovkin. The 2004 Olympic silver medalist is a destruction machine with the charisma, style, power and skill to bring many new fans to boxing. His stellar record of 27-0 (24 KOs) makes him categorically the most DANGEROUS foe out there for Floyd and anyone in the MW division and below.

Even the most ardent critic of Money would give him full credit and praise for making this fight. Golovkin has a killer resume and the belief of all boxing pundits that GGG is a true assassin. The challenge here is finding a suitable catch-weight.

How low can Golovkin go? 152 would be fair. The question is how feasible would that cut be for the 160 pound destroyer. This win would enhance the point that Money-May should be considered as the best there ever was.

Despise him all one wishes, but respect him should this fight ensue. Hard work and dedication would truly be tested in this potentially epic showdown. Not only would this forgive any past transgressions, Floyd would change his legacy from avoider to maker of great fights. He would become a symbol of what is good about boxing!

Timothy Bradley, with a win over Juan Manuel Marquez, will cement himself as the biggest threat at 147, which is Floyd’s current natural home. He will have dramatic wins over Marquez, Pacquiao and Ruslan Provodnikov, Peterson and many other legit names. While some of those outcomes may merit an asterisk to some, he has an undefeated record and the legacy of Mayweather would definitively be enhanced with a decisive win over Desert Storm.

This is a fight that Money MUST make. He cannot have another undefeated fighter in his division while claiming global supremacy. Critics would be right in speaking despairingly of Floyd for not making this fight should Timothy convincingly defeat Marquez, whom Floyd easily bested.

Bradley is a top fighter and he deserves this chance; it would hurt Floyd’s legacy if this is not made. The absence of a Bradley fight, in today’s context of Floyd’s record and Bradley as an undefeated welterweight champ, would further discredit Floyd’s legacy.

Adrien Broner refers to Floyd as his “big bro” and has magnetic panache in the ring. His penchant for flash and style make him a “must watch” as his high ratings indicate. The undefeated multi-division world champion is debatably the future of boxing, and no one can debate his skill and talent. For the old lion to go out battling the young contender would speak volumes to the class of Floyd’s level of competition.

Pundits would salivate over this contest. This would be boxing’s most exciting fight in years. The notion of Money taking easy fights would always be negated by this counter point, the Broner fight. This would clearly earn him a pass for any perceived past liberties the king has taken in past selection processes.

The winner of Amir Khan and Devon Alexander in December of 2013. Khan, whom I predict will win, would be the bigger draw. The Brit’s only weakness has been his chin (Garcia, Maidana, Peterson and Prescott proved that) and the only knock against the world’s best is the lack of one-shot-KO power.

Khan-Mayweather would bring UK hype and promotion to the bout and make this an international sizzler. In terms of hand speed, few can compare with the leader of The Money Team, but Khan might be the rare exception. His destruction of Judah was evidence of that. The 28-3 multi-time world champ is a dangerous threat to defeat anyone on his night and the public would agree.

Canelo rematch. As impressive as he has been up until now, assuming Floyd defeats Canelo, it would be nice to see how Alvarez would do in a rematch with more seasoning. Ideally, this would be the perfect way to definitively end a career that should be spoken of as, if not THE greatest of all-time, the greatest of his generation and one of the greatest of all time.

Those are what I predict to be the most intriguing matches out there should Floyd be interested in making a run at the GOAT title . However, there could be upsets along the way and lustre could be lost among the mystique of some of the names I mentioned in the future. I have contingencies prepared for this and for the reality that match-making in boxing is inherently complicated. Here are other potential blockbuster bouts for Money.

Ruslan Provodnikov made himself an instant star with his performance against Bradley. He is slated to battle Mike Alvarado on October 19th of this year. It is very likely he will possess near Gatti-like iconic hero status after that bout. Assuming he delivers against Alvarado, the fans would absolutely love to see him go after Mayweather.

Ruslan has won over the hearts of boxing fans and the sporting world alike. Should he perform well against Alvarado, he could merit a shot at the kingpin. The match would be entertaining, and this would showcase Money’s willingness to take on fighters who bring it every time-an attribute the usually safe point playing Mayweather has not demonstrated in recent years.

Provodnikov will bring a fight to anyone and it is difficult to imagine how that fight would not increase the esteem of Mayweather’s career. Finding someone to categorize Ruslan as a soft fight would be harder than finding a camera Floyd did not love. It would be a great fight for boxing and for Floyd’s claim to the man who fought the best of the best.

Cotto and Marquez also make compelling rematches. Marquez has now adjusted to his new weight and Cotto bloodied Floyd in their original bout. This would obviously be contingent upon both of these fighters earning the shot by having some big wins.

Austin Trout, should he prove himself in his post-Canelo career, would be a quality foe. He also would need to recover from the Canelo loss by adding some key wins to his ledger before getting the shot.

Sergio Martinez has proven to be a top champion with big wins in his career. Yes, his chin and age make him fodder for critics to suggest he is unworthy, but he deserves more credit than that and would be an important champion vanquished on Floyd’s long list of dethroned champs.

These are ten amazing fights for Floyd to end his career. Each one, a testament to his ability to face the best and the most proven warriors that no one can deny proves that Mayweather ended his career fighting the best there was to fight, other than Manny Pacquiao. These are great fighters in their prime- as opposed to late versions of Mosley and De la Hoya- and can provide the opportunity to emphatically erase any perceived stains on the perfect resume of a man striving for eternal recognition.

Should Floyd end his career as described in this article, it would a tenable argument to say he is the greatest of all time-even without defeating someone named Manny.

Previous Canelo vs Floyd: Canelo Address the LA Crowd
Next The Greatness of Floyd Mayweather