Last night HBO aired their pre-fight interview, stylized show between Floyd Mayweather and Miguel Cotto called Face Off, a series that debuted with Mayweather and Shane Mosley when they squared off against each other a few years back in 2010. 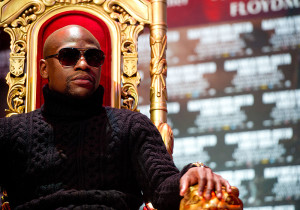 The set-up is simple: the show is hosted by HBO commentator Max Kellerman, who sits in the middle of the table between the two fighters, asking various questions that both fighters answer while sitting on opposite ends across from each other.

Cotto’s last Face Off encounter took place before his rematch with rival Antonio Margarito. This encounter was intense, due to the accusations of illegal use of hand wraps brought up by Kellerman and then reiterated by Cotto himself.

As we all know, Mayweather has a long history of trash talking his opponents, especially before a fight. Mayweather trashed Arturo Gatti, saying “Gatti’s got no discipline, he lets his weight go up between fights. Gatti’s never been in with a guy like me. He’s a club fighter.” He continued his assault with, “I’m an A plus fighter and he’s a C plus. His chances of winning are like a guy down to his last two dollars, putting his money in a Mega Millions machine trying to hit the jackpot.”

The brash Mayweather took aim on Manchester’s Ricky Hatton, after the Hitman initiated the back and forth banter.

Mayweather said, “He’s definitely getting knocked out. I am the best fighter in boxing today, and I’m prepared for any challenge my team puts in front of me. And Ricky Hatton, it’s already personal. He has talked and disrespected me so much in the past months that I can’t wait to get him in the ring and show him he is not even on my level.”

Other victims of Mayweather’s assault include Oscar De La Hoya, Shane Mosley, Victor Ortiz and most recently Manny Pacquiao. So heading into this Face Off between Mayweather and Cotto, many people were probably expecting a verbal onslaught from Mayweather. But instead, the opposite ensued. Mayweather actually complimented Cotto, showing a lot of respect for his skills inside the ring, and for his character outside and on how he handles business. Mayweather even seemed somewhat compassionate over the Margarito hand wrap situation Cotto had to endure, and even referred to Cotto as, “An undefeated fighter.”

Mayweather showing respect for an opponent is nothing out of the ordinary. He has displayed, on several past occasions, respect for his opponents. His trash talk is merely his “Pretty Boy” or “Money” showbiz persona, essentially trying to sell the fight: he is an entertainer.

But showing such respect before a fight is a little unusual for Mayweather. He didn’t really disrespect Juan Manuel Marquez considerably leading up to their fight, and he did seem a bit reserved as far as trash talking Ortiz in the lead-up to their fight as well. But he certainly didn’t compliment Ortiz, and things did eventually heat up between the two during the weigh-in.

While seemingly trying to find a psychological edge over his opponents, perhaps Mayweather is luring Cotto into a false sense of security by complimenting Cotto’s watch, explaining the process of making and monitoring a sports bet, calling him, “A quiet killer,” and respecting his path to the top because according to Mayweather, Cotto “earned it the hard way.” Mayweather even asked Cotto about the Margarito incident, asking if he felt cheated and offering his opinion on Margarito permanently being banned from the sport.

Whether all this is part of the plan or just an matter of respect for his opponent is unknown. “Sugar” Ray Leonard was known for employing tactics like this as he tried to initially with his rival “Marvelous” Marvin Hagler. Perhaps more steps to this psychological warfare, if it is such, will be revealed in the preceding days leading up to the fight with the HBO show 24/7, and with the weigh-in and interviews that follow.