Let’s not kid ourselves, it’s probably just a pipe dream. What a sweet pipe dream it is, though, especially now that the Floyd Mayweather universe appears to be void of much lucrative competition (save for perhaps Manny Pacquiao). By lucrative competition, I mean the kind of opponent who can bring in pay-per-view buys. For, in truth, Mayweather’s easy win over an overly hyped, but game Canelo Alvarez wasn’t exactly the kind of event that makes fans want to return to the well. 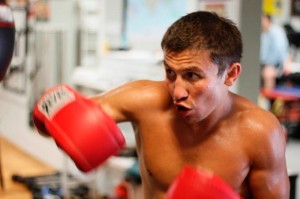 In fact, Mayweather’s complete dominance is simultaneously bad and good for the sport of boxing. Good in that few have seen a fighter of Money’s skill in at least a generation (and, let’s face it, possibly ever), bad in that the guy is so good his remaining fights will most likely risk feeling like non-events.

Yet a match against middleweight king Gennady Golovkin at a catch weight could change all that. Never mind the fact that Golovkin is white (since the fall of the Iron Curtain, quality Caucasian fighters are neither a rarity, nor a guaranteed box office draw), the man would bring in fans because his punches are like sledgehammers. Unrelenting, methodical sledgehammers.

Seriously, the guy reminds me of Julio Caesar Chavez in his prime – only harder punching. Much harder punching. I’ve yet to see him be anything other than cool in the ring, either. In short, I simply don’t seeing him getting psychologically swept away by the Money Hype Machine.

Aside from Golovkin, though, just imagine what such a match would do for Mayweather’s reputation. The only blemish on Money’s blemish-free resume, after all, is the question of how he would do against a serious opponent who’s in his prime. The Manny Pacquiao boat seems to have sailed. Even if the two do end up entering the ring at some point, Mayweather would still be charged with waiting until the Filipino was over the hill.

The ugly truth is that Mayweather is plagued by whispers he ducks serious threats. What’s more, opponents who could indeed qualify as serious threats to Money’s pound-for-pound throne (I’m thinking Timothy Bradley here) simply wouldn’t make for exciting competition. Mayweather may be right in using a chess metaphor to describe boxing, but fans still demand some level of excitement in the sport.

And I can think of no one more qualified than Golovkin to provide that excitement. I can see the ads now: slow motion shots of GGG dropping opponents like flies interspersed with images of Money staring defiantly into the camera. You’ve got to admit, it’s something you’d pay to see. And so would a lot of other people.

So why won’t this fight likely happen? Why is it merely a pipe dream? Writing for Yahoo Sports, Andreas Hale last July implied that Mayweather, or at least people within The Money Team, would be skittish at the possibility of going up against Golovkin. And, in truth, there’s good reason for them to be. As Floyd Mayweather Sr. himself has stated, it’s important for his son not to get hit at this point in his career. Golovkin not only represents the possibility of Floyd Jr. getting hit, he represents the possibility of the man getting knocked unconscious.

I find this rather sad because, in all honesty, I think Money can take GGG – and rather easily. Sure, Golovkin is a menacing and persistent fighter, but can anyone really see Floyd failing to avoid the man’s punches? Mayweather is so fast, so complex, and so accurate with his own punches, that I find it difficult to imagine him losing this one – or even coming close to losing for that matter.

Oh well. At least I can dream.