Former unified Middleweight champion Gennady Golovkin (GGG) returns to the ring this Saturday night in New York City, at Madison Square Garden. His opponent, Sergiy Derevyanchenko, will be one of the biggest test of his hall of fame career.

The eyes of the public will be fixated on this contest for several reasons. For one, GGG enjoyed success at the highest levels with former trainer Abel Sanchez. From 2010 until just last year, he captured every Middleweight title outside of the WBO belt. He successfully defended his crowns 20 times to tie the record with Bernard Hopkins for the most defenses in Middleweight history. 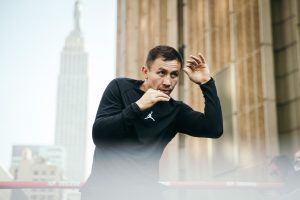 In the biggest fights of his career he always rose to the occasion. His record may indicate that he no longer has a perfect record but that shouldn’t be the case. In two matchups against Canelo Alvarez, GGG, to most observers, should have been awarded the victory in both contests. GGG has defeated challenger after challenger and he has looked dominating in doing so. In short, it was a historical run that GGG and Abel Sanchez went on.

With the accomplishments that they managed to achieve, it came to the surprise of many that the two decided that they were better off without each other. GGG began a new adventure with head trainer Jonathan Banks. So far so good, as GGG destroyed Steve Rolls in the fourth round in his last ring appearance earlier this year.

GGG didn’t look any different to be honest. It’s understandable. The relationship between a fighter and trainer is not one can not be an impetuous one. Those assumptions are erroneous. For this contest, GGG feels more comfortable with his new head trainer. That comfortably, he believes, will lead to a great performance as he is looking forward to unveiling a few new wrinkles in his game.

“We have new ideas to show you guys,” said Golovkin after his public workout. “I want to show Saturday night not right now. I’m just a little bit excited.”

As for his opponent Derevyanchenko, he has a plethora of experience at his disposal. Compiling a list consisting of 390 wins against just 20 defeats, Derevyanchenko has faced just about every style imaginable. GGG is very familiar with the work his opponent has done in the amateurs.

Even with the success that Derevyanchenko has enjoyed in both his amateur and pro career, GGG won’t hesitate to put an end to the contest early.

“I want to stay with my style. Big drama show. If he gives me a chance first round, second round, it’s finished so don’t blink.”

Whenever the former unified Middleweight champion enters the ring, the world is always watching. Questions about the pairing between GGG and his trainer will soon be answered. It won’t be enough that these two just win, but it will be more important that they do so in a way that looks different than how GGG has normally performed with his former trainer. With a possible showdown with Canelo Alvarez still possible in 2020, GGG has to put on a great performance in order to warrant it.

Previous Who Is Next for Errol Spence Jr?
Next Russell Peltz: 50 Years Of Excellence