HBO Delivered a KO With the Gatti/Ward Documentary

Few boxing fans of any age can think of a better trilogy of fights than the Gatti/Ward series. These three matches were as exciting as it gets and fans had trouble deciding who to root for since both guys were such great men. They had heart, passion, and guts. They gave their all for their sport and never backed down. 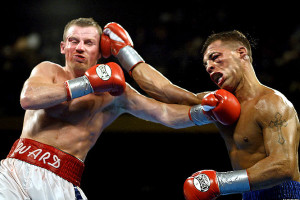 HBO put together an incredibly touching documentary about their unique connection and I doubt anyone could sit through it without shedding a tear by the emotional ending. It was especially poignant for those of us who knew–and admired–both of these amazing warriors.

By anyone’s standards, both of these men were exceptional. Not they that were Mayweather-level pugilists, but they brought a special kind of intensity to the sport that ignited ten-fold when they faced each other. Their first fight, in May 2002 at Mohegan Sun, was one of the most phenomenal fights I have ever witnessed. It wasn’t because of their skills or expertise, it was because they both left their hearts, blood, and guts on the canvas and went toe-to-toe for 10 grueling rounds. You rarely see a match so profoundly fought.

Even the most devoted Gatti fans were awed by Ward’s perseverance and cheered when the fight was over. On that particular night, Ward was at the apex of his career. He dug deep and pulled out a spectacular victory.

Six months later in Atlantic City, these two men did it again. Without taking a tune-up fight in between and without any hesitation, they simply touched gloves on November 23, 2002 and continued their war. This time it was Gatti who would have the most to be thankful for that Thanksgiving. He clearly beat his nemesis, leaving little doubt that they would have to fight a third time to break the tie.

Again they thought it over, took time to heal, and in June, 2003, they laced up their gloves once again. Gatti won and Ward retired. HBO knew that a legendary trilogy was etched into boxing history. Their recent documentary summed up the iconic relationship between these men in a heart-wrenching way. Through interviews with the principles and footage from all three fights, they painted a portrait of a rare and deep platonic love between two men.

As the documentary showed so eloquently, these two men developed a deep and unbreakable friendship, based on mutual respect. In many ways, they were mirror images–two men carved from similar cloth. From the final bell of their third fight, their lives and families would be forever entwined. Ward even ended up training Gatti for his final fight. Theirs was a rare and unusual bond.

The boxing world was stunned when it was announced in July 2009 that Gatti had been found dead in Brazil. He had been retired for a couple of years, was married with two children, and seemed to be enjoying his life. The original rumor that was rampant was that his wife, Brazilian Amanda Rodrigues, had murdered him. She was arrested and kept in custody for three weeks. Many who knew the couple were not surprised. Theirs was allegedly a volatile relationship.

Brazilian officials ended up releasing her and ruling the death a suicide. No one who knew Gatti bought that theory, including Micky Ward. Now, six years after his mysterious death, HBO has captured the magic that these two men created together. Sadly, Arturo Gatti is gone. But his memory and legacy will forever be preserved.