Is the Political Water Too Deep for Manny Pacquiao?

When Manny Pacquiao talked to the Associated Press about the controversy that was caused by the comments some attributed to him about same-sex marriage, he did not back down from his general stance, but made clear that it didn’t go to the point of extremism some suspected. 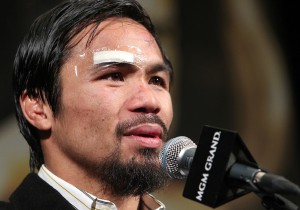 Yes, some jumped on that, rationalizing that having gay relatives wasn’t, in and of itself, a strong credential to demonstrate one’s tolerance. And some people are always going to have a problem with the “law of God” thing.

But when you think about it, in that way he isn’t any different than a lot of politicians who win elective office in this country (the United States).

But perhaps there’s the rub.

Those politicians are not on TV peddling computers, athletic shoes or liquor.

There’s a good reason Michael Jordan, the most significant sports celebrity spokesperson of this generation, said “Republicans buy sneakers too” when he was asked to endorse a Democratic candidate for U.S. Senate against ultra-conservative Jesse Helms in his native North Carolina.

What Jordan was saying, in effect, was that he recognized that when you are endeavoring to be a commercial figure, you really can’t afford to lose a sizable portion of your constituency over political issues, because among other things, there is the relationship with the corporate partner to worry about. When you’re selling on his kind of scale, you’re selling to EVERYBODY, not just a niche that is divided along any particular lines.

While it is hopeful that some of the journalists involved in this episode will learn a lesson from it, as it regards jumping to conclusions and doing the homework necessary to avoid it, Pacquiao should have learned an extremely valuable lesson from it as well.

That lesson is not necessarily about mixing religion and politics, but instead religion and politics AND sports, specifically sports marketing and business. That can be a dangerous potion for a guy who’s on the lookout for every big-money endorsement he can find, not to mention as wide an audience as possible over the pay-per-view platform.

Sometimes you have no idea what is going to offend some people, but sometimes you really do. There is no question that the so-called “moral” issues are divisive by their very nature. The effect of this in the Philippines may not be the same as it is in the U.S.

However, in an age that is characterized by the immediacy of information, it was only a matter of time before the conservative views Pacquiao chooses to espouse were going to gravitate into the discussion over here.

As such, it is not unreasonable to question whether Pacquiao might just be in over his head in politics. Sure, public office was a “perk” that was very accessible with his popularity and money. But politics, unlike boxing, has a no-holds-barred quality to it.

Did Pacquiao realize the entirety of what he was getting involved with?

The religious angle is something that has gained more and more favor among American politicians since the emergence of the Moral Majority. It is seen as an effective device, whether the politician is a true believer or not, and many have followed the “blueprint.”

We’re not here to deliver an editorial as to whether Pacquiao is a true believer; he may well be, as he sees it, though there is legitimate argument that he has, at the same time, found something convenient in it as a quasi-political platform.

If he is indeed using religion as a political device, Pacquiao is learning more and more each day that it can be a double-edged sword, and he is going to have to weather the occasional storm that comes with it, especially as he is seeking to balance life as a “man of God,” an elected official, and a commercial entity.

It’s a balancing act that is not easy.

Pacquiao might have gotten a pass of sorts this time around, but when people get familiar with his anti-choice position on abortion, there is likely to be additional opposition to him, and with very little wiggle room because he is crystal clear on the issue.

And he may have to reconsider the biblical literalism he seems to have been advocating. As he stated, or at least implied, to writer Granville Ampong that people should “just believe” scripture when it comes to the same-sex marriage issue, there are considerations that need to be made. If you are going to lean on scripture, in its literal meaning, and advise people to take it at face value, you need to know what ALL scripture says, and that is why, to an extent, we can’t let Pacquiao completely off the hook since, by his own admission, he did not read the Book of Leviticus.

So frankly, he should do a lot more Bible study if he is going to assume the role of a religious and moral leader.

Then there are going to be these objections that are not all that reactionary, such as that which came on a site called GetReligion.org (http://www.getreligion.org/2012/05/pacquiao-homosexuality-tolerance-and-reading-comprehension/):

“Pacquiao may or may not have quoted Leviticus. Many Christians do. Often they shout it out to condemn gay people. Apparently Pacquiao does not dispute the fact that he did cite Sodom and Gomorrah. Is that a civil thing to do? It seems to me that his tolerance is more in question than the tolerance of Los Angelinos. But of course Christians will go to any length to cast themselves as victims even as they routinely threaten gay people.”

Clearly there will continue to be a lot of room for interpretation in what Pacquiao says and the way he feels, as different people (i.e., different potential customers) see it in different ways.

If you were wondering how Bob Arum is seeing it, all he wants to know is whether this will make more or less people buy the June 9 pay-per-view, as Pacquiao fights Timothy Bradley in Las Vegas.

I don’t think there’s any room for misinterpretation in THAT.