I sure wish I was going to be on the Atlantic City Boardwalk this weekend to watch the big Showtime fight card in person. This is going to be a terrific card. The top two fights are both interesting match-ups and I smell a possible upset in the air. 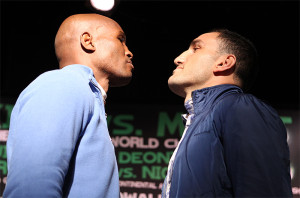 The top slot features ageless Bernard Hopkins who seems to defy both Father Time and Mother Nature against 25-1-1 Karo Murat. At 48 years old with 61 fights under his belt, the man is still a force to be reckoned with. He has never been stopped in the ring and has been in against a who’s who of boxing.

Murat is a 30 year old German Light Heavyweight whose only loss was three years ago in the UK to Nathan Cleverly. The ref waved off the action right before the 10th round, based on the doctor’s advice. Murat has knocked out half of his opponents and although this is his first time fighting on this side of the Atlantic, he is eager for a knockout in Hopkins’s backyard.

As for Hopkins, he is the first to admit that he hasn’t knocked anyone out since Oscar de la Hoya back in 2004, back when he was a middleweight. Whether it’s his age or diminishing power, he has still managed to beat Antonio Tarver, Winky Wright, Kelly Pavlik, Roy Jones, Jr. and Tavoris Cloud just by his dazzling boxing abilities. Not bad for a man who is just this side of the half-century mark.

His IBF Light Heavyweight belt is on the line and I’m sure B-Hop wants to hang on to it for as long as possible.

Many fans are even more excited by the co-main event. Undefeated Peter Quillin, known as Kid Chocolate, is putting his WBO Middleweight title up for grabs against tough Gabriel Rosado. Rosado made a ton of new fans when he fought Triple G last January. He didn’t win, getting stopped in the 7th round, but he fought with such determination and ferocity that fans came away with new respect for the Philly native. He came back a few months later to fight an ND (No Decision) fight against L’Leon Love. Unfortunately, Love tested positive for a banned substance.

Kid Chocolate has dynamite in his fists. He has stopped over 70% of his victims and sees Rosado as simply another notch on his belt. He has been quoted as saying it will never go the distance and he will demolish Rosado the same way GGG and Angulo did. We shall see. Quillin certainly seems to be in a different league that Rosado. But Rosado wants this one badly.

The 10 round bout on the cars pits undefeated heavyweight Denotay Wilder against light-hitting Nicolai Firtha. This is merely an activity fight for Wilder. Firtha is a journeyman with ten losses and only a mattering of KOs on his record. He is a name on the records of guys like Jonathan Banks, Tyson Fury and Alexander Povetkin.

Wilder has worked his way up to #12 in the world. At this point he is just racking up wins and waiting for his big shot. He is not losing any sleep over Firtha, who has lost three out his last five fights. His last win was over a guy with a 23-21 record. Enough said.