Jackie Kallen On Boxing: Why I Love Manny Pacquiao

I love Manny Pacquaio. Not just because he is a terrific fighter, beloved public official, and a fairly decent singer. I love Manny because of the way he treats people. 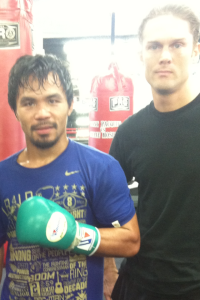 The crowds that gather every day outside the Wild Card Gym in Hollywood will attest to the fact that Pac Man is one hell of a gentleman. Unlike some champions who get jaded, cocky, and impatient with fans–Manny is the consumate professional. No wonder he is successful as a politician. From posing with babies to signing every item under the sun–this man displays grace and dignity.

He has every right to be conceited. At 32 years of age he is the sport’s only eight-division champion. Think about that one. Eight different divisions. He serves in the House of Representatives in his home district (province of Sarangani) and has more money than he needs. Yet he remains down-to-earth and humble.

He has a seemingly ideal marriage to his wife Jinkee. They have four adorable children. And how can you not love a man who names his daughters Princess and Quennie? His personal life alone makes him a winner in my book.

The man is a devout catholic who practices what he preaches. He is a God-fearing church member who often goes to mass after a fight to thank God for the win and his good health. He is a military reservist with the rank of Sergeant Major.

This is the same guy who. at the age of 14, lived on the streets of Manila until the government took care of his room and board when he made the Philippine National Amateur Boxing Team.

Manny owns his own basketball team–the MP-Gensan Warriors–and often plays with the team as #17. He also hosts “Manny Many Prizes”, a weekly variety/game show in the Philippines. Some of the money given away to winners comes directly from Pacquaio himself.

Whether or not he beats Juan Manual Marquez Saturday night, he is still the man I admire most in boxing right now. His first two fights with Marquez were close affairs. These two men are keenly matched rivals. They are close to the same height, both in their thirties, and have both had close to 60 professional bouts. I hope Manny stops him this time. Nothing would make me happier.

If we had more guys like Pac Man in the sport, boxing would be in a better place. He epitomizes the word champion and is a role model for other fighters. Even other champions look at Manny as a hero. He will make us all proud on Saturday night at the MGM Grand.

Jackie Kallen is a boxing manager who has been in the business for over three decades. Her life inspired the Meg Ryan film “Against the Ropes” and she was a part of the NBC series “The Contender.” www.JackieKallen.com, www.facebook.com/JackieKallen