Well the facts are the facts. When Timothy Bradley fought Manny Pacquaio in June 2012, he squeaked by with a highly controversial split decision win. The crowd booed their heads off, the writers denounced the decision, and Manny knew he had been screwed. 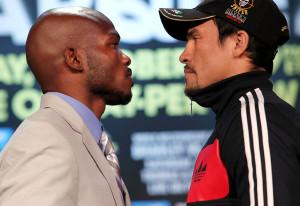 When Juan Manuel Marquez fought Pacquaio six months later, he dropped him on his face like a sack of wet noodles. The thud could be heard into the cheap seats and it took Manny awhile to get over the fact that he was stopped with just one second left in the sixth round. Bad timing.

So, a casual observor might surmise that Marquez and Bradley should be a shoo-in win for the stronger, older, more experienced Marquez. We will find out when they meet in Vegas on Saturday night. At 40 years old with 62 bouts under his belt and a 64% KO ration–Marquez is a slight favorite. But you simply can’t count out the undefeated 30 year-old. It’s a fact that he has only had half as many fights as Marquez but he is a superb boxer. He has not displayed a thunderous punching ability, but he manages to win with his speed and skill.

JMM went the distance with Floyd Mayweather, beat Juan Diaz twice, and gave Marco Antonio Barrera a boxing lesson back in 2007. And who can forget that he mixed it up with Pacman four times? He also soundly stopped Joel Casamayor in 2008 in the eleventh round of their fight.

Bradley also beat Casamayor (three years later) and stopped him in the eighth round. Earlier this year he survived a twelfth round knockout to beat Rusian Provodnikov, but it was a brutal fight and took a lot out of Bradley. His list of victims includes Nate Campbell, Lamont Peterson, Devon Alexander and Kendall Holt. He is obviously a gifted fighter at the apex of his career.

So it’s another one of those age versus youth fights. JMM is a decade older. It is also a question of power (JMM) versus boxing domination (Bradley.) Bradley’s WBO Welterweight belt is on the line so the challenger will have to take the belt from him decisively. The man who starts fast and dictates the action will have the early advantage. The longer the fight goes on, however, the more it favors the younger man.

Will JMM fade in the later rounds? Will Bradley steal rounds by sticking and moving and using his excellent jab to his advantage? Will the judging be more fair than it has been in recent fights? Many questions.

I have a hunch that the name Marquez is going to be the first blemish on Bradley’s immaculate record. I see it as being a close, competitive fight. But my gut tells me that JMM will dig deep and go toe to toe with his younger opponent. I could be wrong, but I see this as a fight that Marquez is very serious about. He is a proud man and a win over Bradley would mean a lot to him.

Previous History vs. Respect: The great prizes for Juan Manuel Marquez and Tim Bradley
Next Marquez-Bradley Undercard: A Night of Boxing Firsts: the undercard