Sticking a Showtime microphone in the face of Juan Manuel Lopez moments after he was stopped by Orlando Salido was a grievous act. The man needed medical attention, not an interviewer looking for pithy comments. The Puerto Rican commission, by punishing him with a one-year suspension for the remarks he made, piles additional offenses onto the original. 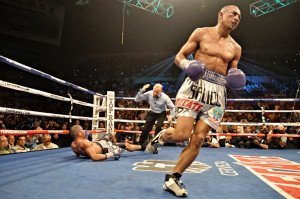 Trouble is, promoter Bob Arum called the commission’s action “ludicrous.” And this is the same Arum who claimed the plaster of Paris found in Antonio Margarito’s wraps before his fight with Sugar Shane Mosley was actually hand lotion (which, by the way, would also be illegal. Only gauze and tape are allowed on those hands, in correct quantities and distributed in the proper places. The rules on this are precise and clear).

So whenever you agree with Arum you really need to double check. Maybe you made a mistake somewhere. “The Puerto Rican commission should be ashamed of themselves,” he said. “To punish a kid for saying anything after he has been concussed in the ring is ludicrous. People who have suffered a concussion and who have suffered that type of punishment when they are still feeling the affects of it are prone to say anything.

“And they’re not responsible for what they say. Now if he said it the day after, or sometime after, yeah, you can throw the book at him. But not when he says it immediately upon being concussed and being knocked out. That is not right.”

Let’s face it. This time Arum’s right as rain.

The commission also ordered Lopez to pay a $10,000 fine and provide 100 hours of community service, according to The Associated Press. He has 20 days to file an appeal, and you can bet he will. If you saw the fight you know wobbly Lopez, after rising from a knockdown, made rambling, disjointed remarks insulting referee Roberto Ramirez Sr. I won’t repeat them because repeating a slander, even against a public figure, can make you liable for a lawsuit too. If you didn’t see the fight and want to know what he said, you’ll have to read a story by a dumb writer or check YouTube.

Scrambling into the ring to interview a hurt fighter who needs a doctor is dangerous, stupid, tasteless, and inconsiderate. It’s like sticking a microphone in the face of someone with obviously broken limbs who just saw a tornado carry off his house. And we always know the question: How does it feel? Are there no limits to electronic indecency? Incidentally, Lopez has asked for forgiveness and said he can’t recall what he said or did after the fight until he saw a video of himself the following day.

Jim Gray committed the interview deed this time. When it’s HBO, Kellerman and Merchant take turns, just as sewer workers take turns going down in the hole. Because they’re not actually killing anybody I don’t place particular blame on the questioners personally. We all need to eat, and times are tough. They’re obeying the work rules set down by their media bosses. But I do blame interviewers when they blame the fighter for something the officials did. We see this over and over because officials blunder and cheat all the time and rarely answer for it. But taking it out on the fighter is something we’d expect from Dopey or Goofy, not people who are expected to be responsible. That’s TV though. Everything’s always on the edge of turning into a cartoon — or reality programming. The Situation waits around every corner, ready to dumb down the show and raise the ratings.

I don’t recall every seeing any of these stupid, ambulance-chasing interviews on ShoBox or ESPN2. Way to go, ShoBox and ESPN2.