Anthony Dirrell (29-1-1) fought Norbert Nemesapati (24-3) in Miami Friday in a super middleweight affair that was part of a PBC card airing live on Spike. Dirrell looked a bit sharper in the first, his punches landing harder and cleaner. Things got more physical in the second, with both men pressing against each other. Still, the round belonged to the effective puncher Dirrell. Nemesapati landed clean a few times towards the end of the second, to be sure, but Dirrell’s beard was too strong. Needless to say, Dirrell ended the round banging away at his opponent. 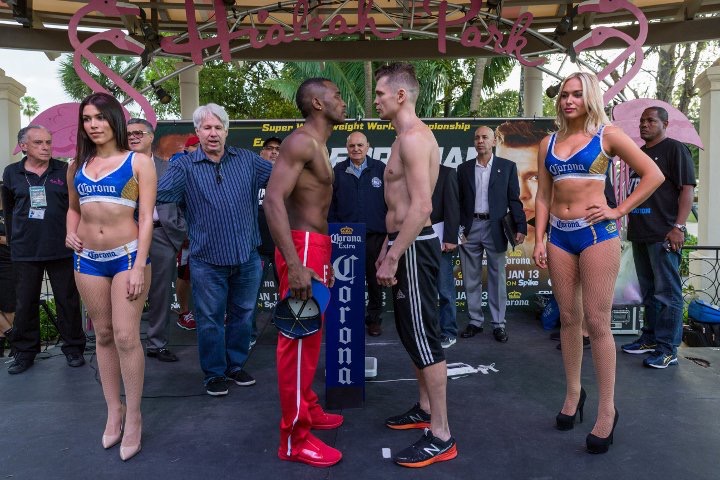 Dirrell’s big punches started taking their toll in the third. Indeed, by the end of the round, the game Nemesapati looked in trouble. To be sure, the man had provided no answers for Dirrell up to that point in the bout. Things began to get brutal in the fourth. Dirrell thudded away while Nemesapati did nothing more than stay on his feet. It was time for the man’s corner to decide whether or not it was time to call it a night.

By the fifth, Dirrell was mocking his man, holding his hands behind his back and daring him to swing. Nemesapati, however, was still standing. He was taking an endless beating, but he was standing. By the sixth round, Dirrell actually seemed to be slowing down. Nemesapati may not have been capitalizing on the situation, but Dirrell was no longer able to keep slugging away at will. Fortunately, Nemesapati’s corner stopped the proceedings after the sixth. It was the right decision to make. Their man had simply had enough.

The second televised fight of the evening featured Juan Carlos Payano (17-1) and Isao Carranza (15-7-1) in a bantamweight affair. Payano landed some solid shots in the first. Carranza may have had the height advantage, but it didn’t do much for the man in round one (though Carranza did push forward hard in the final seconds). The second round showed good movement on the part of Payano, as well as more effective punching, thanks in part to a very effective southpaw jab.

Payano continued to glide along through the middle rounds. In truth, the one sided nature of the fight made the bout monotonous. Indeed, the referee had seen all he needed to by the 7th, and put Carranza out of his misery by wisely stopping the bout. It was now time for the main event between IBO and WBA super welterweight champ Erislandy Lara (23-2-2) and the former WBA world super welterweight champ, Yuri Foreman (34-2).

Round one, frankly, was close, though Lara may have edged it. The second round was also a tentative affair. People expecting Lara to blow Foreman out were so far sadly mistaken, though Lara did get a clean shot in during the final seconds of the round. Lara started taking control in the third – though a slip ruled as a knockdown against Foreman was a bit unfair. A thunderous uppercut took Foreman down in the fourth – and that was that. The referee stopped the fight as a wobbly Foreman gamely tried to get up and stabilize himself. It looked like Foreman may have hurt his leg – which had given him trouble in the past – but it was impossible to confirm at the time.

Previous Breaking News: Canelo Will Fight Chavez Jr. On May 6th
Next DeGale And Jack Ring In Boxing’s New Year With A War On Showtime