Mellow Iron Mike Tyson — Is This Guy for Real?

Mike Tyson has always been an open book. Still, his statements were never terribly reliable. He didn’t much understand who he was or what he experienced as life swirled around his ears. He was a member of his own global audience, watching his own breakdown of many years. 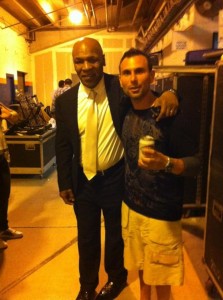 Mike Tyson with his good friend Sam Trocki at Wrestlemania 28

Now that the traditional Tyson honesty is no longer filtered through drugs, booze, and rage, it comes out curiously affecting. He seems a genuinely sympathetic character, marveling at the man he was in the bad old days. Back then he’d sometimes put his head down on the table and take a nap in the middle of a press conference. Or perhaps charge into the room and take a bite out of someone’s leg. His bodyguards weren’t there so much to protect him. Their job was to prevent him from attacking somebody and getting sued again.

Tonight he begins the first of six one-man shows at the MGM Grand where in an act titled “The Undisputed Truth” he will share stories and laugh at himself.

“I am a big glory freak,” he told Oliver Holt of the Mirror in the U.K. “I am an ego-maniac. I like being a peacock and strutting on the stage.”

There it is again, the honesty. There are plenty of glory freaks around, but how many actually own up to it?

Iron Mike, now 45, said he doesn’t expect to get rich from his show-biz career, which began when he surprised us with his engaging performances in the Hangover movies. “I have no money. . . . I am a middle-class guy with a big name and reputation,” he told BloombergBusinessWeek, which naturally asked him about his finances. “I am not a big financial spender or anything,” said the man who once had batches of houses and cars he was barely conscious of owning.

He once accepted a $14 million settlement from Don King in exchange for dropping a $100 million suit, but his debts totaled more than $38 million at the time, so the King millions went right around the Monopoly board without ever touching Mike directly. King settled because he’d cheated Tyson so terribly, and a lot of it was on the record. Terry Norris, under similar circumstances, settled for $7.5 million from King, who next month will be getting an Honorary Doctorate of Humane Letters from the New York College of Health Professions for his “humanitarian” works. He’ll also deliver the commencement address. The administrators at that college seem to have their own peculiar definition of the word “humanitarian.” But I digress.

Tyson gave the Mirror a quick and I thought astute analysis of the state of the heavyweight division: “The Klitschkos are doing great. They are beating everyone. It’s not their fault that there is not enough competition.”

Exactly. They’ve pretty much run out of contenders to knock out, which is why Wladimir is giving Tony Thompson another shot at his belts on July 7. Honestly, have you ever known the Klitschkos to duck a credible challenger? They’re not like some “Money” champion I could name five or six weight divisions away.

I never used to like Tyson. Back during the nineties he once slammed a friend of mine, photographer Brent Cook, against a wall just for the hell of it. Brent wasn’t even taking his picture. He was just carrying some cameras, which made him a target in Tyson’s bullying mind. So is this new Mike for real?

George Foreman seemed to go through a similar personality change many years ago, transforming himself after a celebrated religious experience from a famously glum brute into the goodhearted man we now know. Or had he just pasted a phony smile on his face? Larry Merchant, a savvy guy who saw him up close for lengthy periods, assured me the new Foreman was genuinely nice even to people with the smaller jobs around HBO, people he didn’t have to be nice to. Me, I accept this new Tyson as genuine too. And there’s nothing quite so beautiful as a human being who turns his life around and learns to smile.