Oleksandr Usyk (16-0, 12 KOs) has yet to make his debut at Heavyweight, yet he has his eyes set on the Heavyweight throne.

For this that are not familiar with Usyk, the best way to describe him is a much bigger version of Vasyl Lomachenko. The loud thudding noise must be from your jaw that has currently hit the ground after that description. Lomachenko is wildly regarded as the best pound for pound fighter in the world. Usyk is that good. 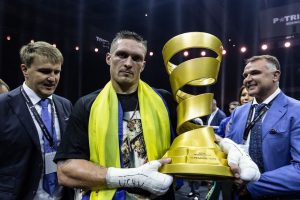 This comes as no surprise, seeing how Lomachenko’s father/trainer also trains Usyk as well.

The Ukrainian born fighter plowed through the Cruiserweight division. In a short span at the weight, he defeated everyone of note and captured every world title. A move to Heavyweight was warranted as he effectively cleaned out the entire division.

Usyk’s Heavyweight debut was booked against longtime contender Carlos Takam in May. It was a decent first step for Usyk and his new venture into an unknown division. The prevailing thought was that Usyk would get his feet wet in a contest against Takam and assuming he won that bout, he would move on to take on the likes of Alexander Povetkin. If Usyk managed to pull off that victory as well, then a matchup with former unified Heavyweight champion Anthony Joshua would take place sometime in 2020.

Like often is the case in boxing, things never go quite as planned. Usyk was sidelined with a bicep injury while Joshua lost in a mega upset against Andy Ruiz. The former Cruiserweight star views this as an opening.

Usyk and his legal team wasted no time. Shortly after Ruiz’s major upset, Usyk requested to become the mandatory challenger from the WBO. They obliged.

Tune ups and warm up contest be damned. Like many fans and experts alike, Usyk sees this as a golden opportunity to win more gold. The Heavyweight division seems to be in disarray and Usyk wants to take full advantage.

It is difficult to find Usyk’s place amongst the current crop of Heavyweight fighters. Deontay Wilder and Tyson Fury are rated as the best two fighters in the division. Andy Ruiz has made his mark as a true champion and although Anthony Joshua was defeated in his last outing, counting him out would be foolish.

Currently, Usyk should be rated behind all of these men, but it won’t be for long. This level of skill from a big man a rarity. It seems only a matter of time before Usyk proves that he not only belongs but that he is the best Heavyweight in the world.

Previous Manny Pacquiao Is Facing His Toughest Opponent Ever In Keith Thurman
Next Charlo vs. Adams and Lubin vs. Attou Fight Preview