At first, Oscar De La Hoya was simply attempting to get back into the ring and shake off the cobwebs. After spending 13 years on the sidelines, the 2014 Hall of Famer was scheduled to end his retirement with an exhibition showdown against former UFC light heavyweight titlist, Vitor Belfort.

Yet, after whipping his 48-year-old body back into fighting shape, De La Hoya has opted to make a full-blown return. Now, the former six-division world champion will remove the headgear and take on Belfort in an eight-round sanctioned boxing match on September 11th, at Staples Center in Los Angeles California.

While De La Hoya has expressed an enormous amount of hubris in the outcome of his matchup against Belfort, he ultimately believes that September 11th will only be step one on his way to a world title reign.

“I believe so,” said De La Hoya to Fight Hub TV when asked if he can make another championship run. “The fact that George Foreman has done it, the fact that Bernard Hopkins has done it, maybe it’s my time.”

On November 5th, 1994, Foreman became the oldest heavyweight champion at the age of 45. He did so when he scored a deleterious one-punch knockout over 26-year-old Michael Moorer. In more recent history, Bernard Hopkins one-upped Foreman.

In 2011, the newly inducted Hall of Famer dethroned Jean Pascal to capture the WBC light heavyweight crown at the age of 46. Now, two years older than Hopkins was, De La Hoya believes he can do the same.

While he wouldn’t go as far as to say that he’s better than he was before, De La Hoya did admit that at this very moment, he feels incredible.

“I feel fast right now, freaken lighting fast. I think that with this mental strength that I have now, with training smarter and my motivation just in life in general. It’s a different route that I’m taking. This route is much easier. Yes it’s strenuous, it’s hard, it’s difficult for your body. It’s tough at 48 but it’s much easier. Why didn’t I figure it out a long time ago?”

Previous Leonard Ellerbe: “Keith [Thurman] Can Fight His Ass Off But Tank Would Knock Him The F*ck Out”
Next Betwinner bookmaker 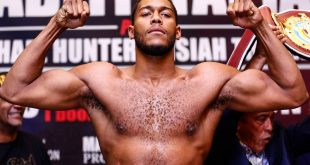