Pacquiao vs. Marquez Tonight – And Pacquiao Wants Another Thrilla in Manila

Could there possibly be another “Thrilla in Manila”? If Manny Pacquiao has his way, that is exactly what is going to happen.

Pacquiao is getting ready for tonight’s fight against Juan Manuel Marquez in Las Vegas. But you can excuse him for looking ahead a bit. Not to another opponent, but another setting. 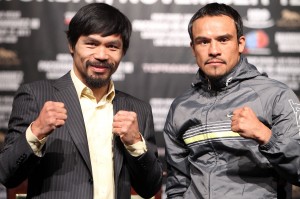 With Joe Frazier’s death this past week, Pacquiao has become somewhat inspired by some of his great fights (which he said he used to watch on DVD), including that third fight with Muhammad Ali, which was held in Quezon City, part of Metro Manila (forgive me if I don’t have the geography completely down pat).

One of the problems, under normal circumstances, is that the time difference makes the thing close to unfeasible, at least if you’re looking at televising it live in the United States. I doubt that HBO PPV would be compromising on the live nature of the event, because nobody likes to see something on same-day tape delay. So you’d leave fans in Manila inconvenienced, time-wise. Not that they wouldn’t still sell out an arena, but you figure that if a main event on pay-per-view TV went on at around 11 PM ET or midnight in America, it would mean Pacquiao’s fight would have to take place at Noon or 1 PM.

Actually, that might not work out all that bad on a weekend, would it?

The biggest problem might be that it potentially becomes too expensive a proposition to hold; that is, if you are going to put other main event-level fights on an undercard. If other Filipino stars were highlighted, that would be one thing, and certainly someone like Nonito Donaire would make for a decent semi-main on a card like that. But there are so many other fighters, cornermen, officials, production people and other tangential personnel who would have to be on hand for something like that. You’ve got travel expenses that could wind up being very high for a card in Manila, not to mention the fact that everyone involved in the promotion would have to be there for close to a week, or in some cases, even more.

I’m just winging it here, but from a logistical standpoint, a championship fight, or any fight of considerable magnitude, for that matter, is a big undertaking. People who haven’t been around the nuts and bolts of such a thing don’t really have an idea about that.

If it needed to be done, it could be done, but I’m thinking that it have to be a fight that had to be held in Manila in order to realize its financial potential. That might have been the case a little earlier in Pacquiao’s career, but at this point he is able to draw just about anywhere, and do sufficient numbers on pay-per-view, so the rationale on the part of an organization like Top Rank is that if a Las Vegas venue can provide a gate or a site fee that is comparable (or most likely more) than what could be realized in a live venue in Manila, they’re going to choose Las Vegas, since that is their home base, and they don’t have to pick up and move everything for the sake of preparing for a fight.

That having been said, Pacquiao is Pacquiao, and right now he is the ticket for Bob Arum and Top Rank. Arum wouldn’t have that big a problem doing a fight in Manila, if it is essentially the way Pacquiao has presented it – as a grand finale, with a farewell right in front of his countrymen. Arum isn’t looking for that kind of thing to happen until at least four more fights have passed, which means Manila may have to be patient until 2013.

I’m sure it’ll be worth the wait.