Boxing, like anything else, is open to intelligent debate. So long as people keep it respectful (if only that were always the case), there’s no reason to get worked up about a disagreement. 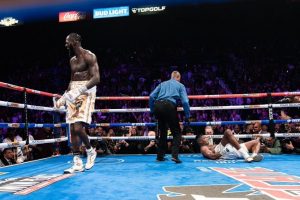 That’s why it’s ridiculous to froth at the mouth because some still don’t feel Deontay Wilder’s power is as impressive as the rest of us say it is. He’s never fought the kind of stellar opposition that warrants that kind of acclaim they say…to which I respond, it doesn’t matter who he’s fought. Anyone who turns out the lights over and over and over again in the abrupt and stunning fashion Wilder does warrants consideration as the most powerful puncher in the history of boxing. I’ve been watching the sport since the late 70s), and I can truly say I’ve never seen anyone hit with the power Wilder has. Not anyone. What’s more, I’ve long been enthralled with boxing history, so I’ve seen most of the acclaimed hitters hit at some point or other – at least that’s true of the ones whose ring endeavors I’ve had access to.

And at this point I’d be willing to say Wilder hits harder than any of them. The brilliant Ernie Shavers, for instance, was more brutally consistent, but even he didn’t strike with the same physical force that Wilder does when he lowers the curtain. The same goes for the explosive David Tua. Gerry Cooney, you say? Sure, the man could take out a wall (the great Larry Holmes himself will attest to it), but could he regularly make you want to start praying for his victims the way Wilder does? Even the iconic George Foreman, I dare say, couldn’t short circuit an individual with the lightning force of Wilder.

Yet I also think it’s worth noting Wilder is more than a basic power puncher. Roll your eyes at Wilder’s foes all you want, but Luis Ortiz could box. So could Tyson Fury. And Wilder sent both those men to the mat on numerous occasions. Consider the argument that most power punchers, heck most anyone, would be frustrated by Fury at his slickest. He’s remarkably hard to hit, especially for a man his size. Rather than losing his cool, though, Wilder kept his focus and hunted. The Fury fight may have ended in a draw (which I think was fair), but the Englishman was just about to wrap up the upset win in that twelfth round when Wilder finally landed his famous shot. What other power puncher would have kept his resolve and gunfighter cool the way Wilder did when time was truly running out?

It’s not just Wilder’s power that ultimately makes him so impressive. It’s his willingness to use it effectively. Wilder doesn’t rely on his knockout punch. He proactively and professionally searches for opportunities to use it. A lesser fighter wouldn’t know enough to do it the way Wilder does. There’s actual skill to the Alabama native’s skill set. Wilder may not go through his career undefeated, but sooner or later, critics will have to keep from writing that skill set off.

Previous Tyson Fury Not Impressed By Wilder: “Wilder has Nothing More Than Punchers Chance Against Me”
Next Anthony Joshua: When I Beat Ruiz I Want Everyone to Bow to My Feet