In the second showing of boxing in the afternoon on CBS, Premier Boxing Champions brings in the young guns to the State Farm Arena in Hidalgo, Texas. In the Bantamweight division, WBA “regular” champion, Jamie McDonnell will step into the fire against a rough and tough undefeated 23 year old former world champion in Tomoki Kameda. Kameda is looking to grow his name in the United States and add a title in another division to his accomplishments. 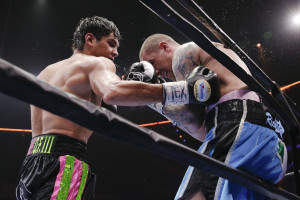 The main event pits two former champions against one another. The veteran is Ricky Burns from the UK, coming off of a couple losses last year, he looks to right the ship and possibly make one last run at a title shot.

Across the ring from him is 25 year old, Omar Figueroa Jr. The local boy, fighting in his home town, who looks to not only get another title shot, but add Burns’ name to his growing resume.


Tomoki Kameda gives up about a four inch height and six inch reach advantage to the Jamie McDonnell. Both fighters come out fighting on the balls of their feet. Kameda shows off his quick hand speed while McDonnell begins to measure the distance with his superior reach advantage. Kameda uses good head and body movement to close the gap and land punches.

Kameda is much quicker, landing equally to the body and face of McDonnell. McDonnell is standing straight up and looks timid due to the speed of Kameda. But McDonnell keeps pumping out his jab, setting a range. Kameda uses his speed and movement to get closer and with one minute left in the third round, Kameda lands a big overhand right, sending McDonnell down to the canvas for the first time in his career.

McDonnell tells his corner between rounds that he wasn’t hurt by the punch and it was a flash knockdown. McDonnell comes out pumping the jab again, but Kameda uses a confusing style to frustrate with feints, decoy punches and foot movement.

The champ McDonnell has dropped his straight up stance, which is helping in his defense and ability to land the jab better. Kameda has superior speed and lands more body shots, unleashing a big right and left uppercut.

In the sixth round McDonnell abandons the jab approach and starts infighting, mixing it up with Kameda. Kameda looks for power punches to the head and throws a lot of overhand rights. McDonnell starting to use more movement, moving in on the smaller fighter.

Both men slug it out, McDonnell landing jabs, Kameda with body shots. Kameda has slowed down with his legs, not moving around as he was, lots of equal exchanges.

The fight is very close going into the eighth round. Kameda slowly moving around the ring, making McDonnell follow him . McDonnell still doing very well infighting. In the ninth both fighters come out landing big shots. Defense has been thrown out the window at this point. Each fighter is trying to set the tempo, only to have it taken away once established.

Entering the championship rounds both fighters are going toe to toe. They know that these final rounds will most likely decide the fight in a very close decision. McDonnell gets the edge early landing tons of punches. Kameda looks for one big shot, but takes a lot of punishment in the process. They both exchange in the final ten seconds and leave it in the hands of the Judges. Great final round, great overall fight.


As the opening bell rings Ricky Burns starts pumping out his jab, landing some heavy right crosses. Figueroa, who came in one and a half pounds overweight looks to have added a good amount more while re-hydrating. 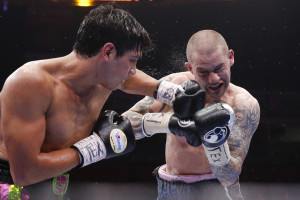 As Figueroa tries to get in close to work on the body burns is stopping the threat with the jab right away.

Figueroa takes a good deal of shots to get inside. Figueroa landing big body shots, but Burns putting some good shots together to Figueroa’s head. Both fighters start to exchange at close range.

The third round shows Figueroa’s game plan, hold and get in close. Burns begins to land big right hands to get out of the situation, but Figueroa consistently stalks Burns and exchanges while doing so. The pace is very fast , with both guys taking heavy shots. Figueroa starts to implement his uppercuts.

Once the bell rings, Figueroa runs in , throws a punch, puts his shoulder on burns’ and starts infighting. Burns seems alright with the style, landing shots of his own, but this has very quickly turned from a boxing match into a phone-booth style brawl, with both men landing head shots and defense being thrown out the door.

The fifth round starts with Referee Lawrence Cole warning burns for holding, which adds to the warning he gave burns in the previous round for hitting behind the head. Both actions seem unavoidable due to Figueroa’s fighting style, of just rushing in and making the fight close quarters.

Burns continues to set his game plan and try and make this a fight, but Figueroa quickly lunges in , cutting the distance and putting no room between the fighters. Burns is able to land some nice body shots and get out, but Figueroa is right back on top of him, showing no wear , and continuing the brawling style he is known for.

The seventh round has Burns start back out with stiff jabs. Figueroa shows that he has an incredible chin, and tries to get back on the inside. Burns is momentarily able to keep Figueroa off of him and put together some combinations. When the fight is at any kind of distance, Burns is superior, but that does not last long. Both men get back to the phone booth and eat a number of shots. In the eighth round Cole takes a point from Burns for holding. Burns is putting together another nice set of combos and after they land, Figueroa rushes right back in to make it toe to toe. Burns seems to have more energy in his shots, but Figueroa shows no distress and is anxious to get right back in.

The final three rounds are more of the same, with Burns trying to fight off a fighter who only knows the way of coming forward. Figueroa starts landing uppercuts in the clinch and has good enough chin to never be afraid of infighting with Burns. Figueroa lands a bunch of punches to the back of burns head, with nothing said by the referee. They trade punches, clinch and Cole takes another point for holding from Burns.

Figueroa comes out to close the show in the final round, throwing as many punches as possible. Burns is tired and carefully tries to hold, but cannot because of the possibility of another point deduction.

Both men put on a great show, throwing and landing lots of punches. Showing a great deal of heart and will in the ring tonight.

Here are what the fighters had to say after their bouts:

“Fighting a fight like that, it takes a lot to go even four rounds, much less 12. With a fighter like that, leaning on you and using his weight on you it’s tough. I’m just glad I was in shape and didn’t let my fans down.

“I’m a very offensive fighter, so the holding kind of slowed me down. I tried to do what I could and, thankfully, the judges saw that.

“My hands are a little sore, but I really did hold back on my punches, especially because he has one of those European guards where he holds his hands up high and his elbows are exposed. I had to be careful going to the body because that’s how I hurt my hands most times, from hitting the elbows. I felt ridiculously strong at the new weight, but I didn’t think my hands would hold up, so I was holding back and trying to win the fight on points and if I could hurt him I would try to stop him.

“He was punching me behind the head, so I felt like I had to do the same. If you want to play like that, I can play that game.

“At the end of the fight, he came with a good body shot that hurt me a bit. That’s why I slowed down at the end. I have to give it to Ricky. He’s a tough fighter.

“It’s time to rest up. I’ve been training since the beginning of the year and I deserve a little rest.”

“We knew it was going to be a tough fight, but I didn’t agree with the deductions for holding. I thought he was holding as much as me and that’s why I had to tie him up.

“We moved up in weight for this one but still had some trouble making weight, but I didn’t want to jeopardize my chance to fight in America.

“I think it was his size that gave me problems more than anything. I don’t know what weight he was in that ring, but it was a lot bigger than me.

“The plan was to try to stick to boxing for the first half of the fight, but once the size really took over I had to stand and exchange more than I would have liked. I couldn’t get him off of me. I’ve got no excuses, as I said the best man will win.

“I always leave everything in the ring and that’s all I can do. I hope everyone who watched enjoyed the fight.

“We’ve enjoyed the experience of being in the U.S., obviously the decision didn’t go our way which puts a damper on it, but overall everyone here in Texas has been great. I want to say a big thank you to everybody. I hope to back again.”

“I felt in control all the way through. It was a great performance. I know I should have just boxed but I wanted to fight.

“I didn’t think I was going to get the decision being abroad, but it’s more than spectacular to come out of here victorious. He’s a great, undefeated champion.

“His speed surprised me on the knockdown. I knew he was going to be fast, but I didn’t expect it like that. I didn’t see the shot and next thing I knew I was on the floor.

“Hit and move, hit and move, that was the strategy. I remember being in there and thinking, ‘Man, this isn’t easy.’ I knew the crowd was going to go his way but it was a great experience.

“It’s been a fantastic time being here in America. I’d like to see some familiar faces but it’s a new experience. I was up against it but I knew I could pull it off. I knew deep inside that I could do it.

“I think I’m going to move up in weight. I want to catch the big fights before they’re gone.”

“I think I won the fight. I did enough to win. He did a lot to win the last rounds, but I did more over the fight. I don’t agree with the judges decision, but I respect it.

“I knew he would get up after the knockdown because he’s a world champion. He’s a great fighter and I take my hat off to him, but I won the fight. 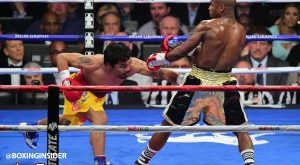 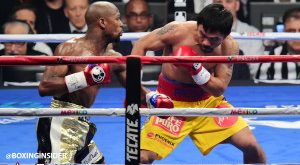 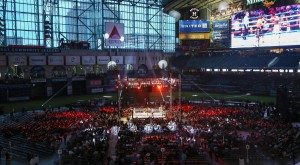