“I’ve been out of the ring for about 8 or 9 months on purpose … to just go back, like to say, to go back to school,” said Stiverne to Boxing Insider on Thursday.

“I worked on my boxing ability, so I feel like now is a good time to go in and do it. To go out there and do what I’ve been working on all these months.”

Fans last saw the heavy-handed Stiverne on HBO, knocking out division stalwart Ray Austin. Although the knockout itself was of the highlight reel variety, Stiverne received criticism for his performance until that point.

“The Ray Austin [fight]…it was like, a bad week,” continued Bermane.

“I actually got sick. I went to the ring with a fever, so I had everything against me. I had a performance I’m not too happy about, but I know I can be better than that. But I got the W. I’m past that now.”

In defeating Austin, Stiverne became the WBC’s “silver” heavyweight champion. He currently holds a #3 rating by the sanctioning body, and the ultimate goal is a fight with its champion, Vitali Klitschko. A fight with the dominant Ukrainian could come sometime between this fall and early 2013 according to Bermane, but for now his focus lies solely on Willie Herring.

“Last time I’ve seen him was when he actually beat one of my friends Troy Ross. That’s the first time I’d seen him. At that time he was crisp. That’s the only time that I’ve seen him. I’m prepared for anybody, whether it’s Willie or it’ somebody else…it makes no difference.”

Also fighting this Saturday outside the province is Trois-Rivières native Mikael Zewski, who squares off against Missouri’s Brandon “The Business” Baue in an 8-round attraction on the undercard of Brandon Rios vs. Richard Abril at the Mandalay Bay Resort & Casino in Las Vegas, NV.

Groupe Yvon Michel has finalized the card for next Friday’s “Fast and Furious” show at the Bell Centre in Montreal.

Tyner recently dropped a decision last December in Quebec City to Kevin Bizier before losing to Jessie Vargas in February. Decarie, possibly the most sound ring technician in the Quebec region, looks to continue the momentum he built in 2011 with wins over Shamone Alvarez and Victor Lupo. 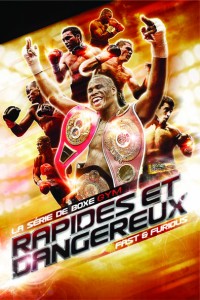 Other fights on the show include Oscar “Kaboom” Rivas vs. Kendrick Releford, Eleider “Storm” Alvarez vs. Daniel Regi, Baha Laham vs. Leonus Marie Francoise, and Eric Barrack vs. Sandy Pembroke.

Ottawa’s Tyler Asselstine will also see action against an opponent to be determined.

Finally, Douggy Berneche of the East Boxing Club in Montreal announced a series of shows coming in 2012, all to be held at CCSE Maisonneuve.

“The events will have the same ideology as last year: shine a light on Quebec boxing,” he says. “The first show will be May 4. The next events will be held on June 8 or 16 (depending on when GYM does its own event), August 18 and September 22.”

“We are particularly proud of Steven Harvey who recently joined the ranks of professional boxers,” said Berneche. “Steven comes from Hochelaga-Maisonneuve and was trained from the very beginning by our team.”