Rabbi (Yuri Foreman) Should Have Been in Temple

Rabbi (Yuri Foreman) Should Have Been in Temple

What might eventually portend as a career ending match, Yuri Foreman (34-3, 10 KOs), was knocked out for the second first time in his career, at 1;47 of the fourth round at the Amphitheater at Hialeah Park South Florida. Dubbed The Fighting Rabbi, Foreman’s ring savvy with his ability to slip punches, and quick thinking on his feet, was no match for Erislandy Lara, (24–2-2, 14 KOs) one of the most avoided fighters in the game. Implementing Metallica’s iconic title song Seek and Destroy, as his game strategy , Lara disposed of the Israeli fighter- originally from the Soviet Union- with a perfectly timed left uppercut that left Yuri incapable to continue on his quest for a second world title. While neither fighter is known for devastating punching power, it was the Cuban born Lara, best, known for setting traps and delivering and scoring with remarkable accuracy, which made the difference. Referee Samuel Burgos’s uncontested stoppage of the fight, places the orthodox rabbinical student in the unenviable quandary of some heavy soul searching contemplation. 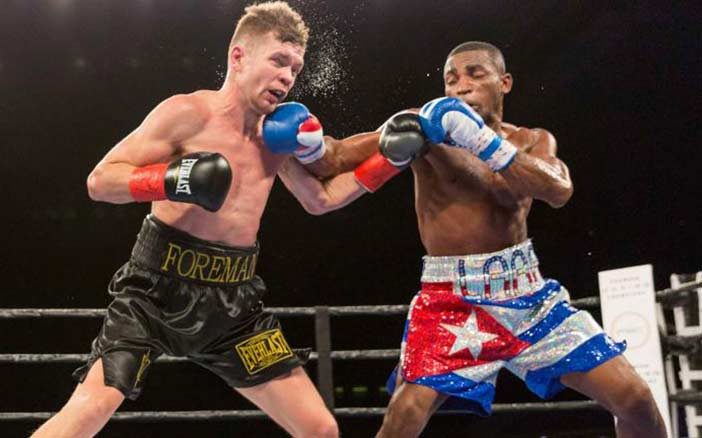 As orthodox Jew,Yuri’s foray into the squared circle is not without precedent. Having been a publicist for former number one welterweight challenger, Dmitriy (Star of David) Salita, (35-2-1) the issues of maintaining religious convictions, while at the same time pursuing the WBA welterweight title was more than simply a case of cognitive dissonance, conflicting beliefs and, by extension, where to implement your energies. Salita, a devoted follower of the Chabad religious sect, formerly of what is now considered the Ukraine then supplanted in Brooklyn, New York, was the avatar to a multitude of Jewish orthodoxy who looked at Dmitriy as more than the stereotypical Jew who favored the philosophical over the physical, books over boxing, as it were. I recall one Saturday when the Jewish Sabbath ended around 7:30 p.m. and he was scheduled to fight in the Garden that same evening. He quite literally went from his sartorially appropriate Sabbath garb to his boxing trunks, from praying to punching.

For Yuri, his dream of securing a world title was played out on the Major Degan on June 5, 2010. Racing the clock, he was escorted by police cruisers to Yankee Stadium -directly following the end of the Sabbath- in his showdown with Miguel Cotto in a super welterweight challenge for the WBA Super Welterweight Championship. As divinity reared its unapologetically spiritual adjudication, it was not meant to be as Mr. Forerman lost via a TKO in in the ninth round.

Yuri Foreman’s issues, this writer believes, was and is, his inability to reconcile the spiritual with the ethical, who, and, more importantly, what he is. If, as I believe in Yuri’s case, he is unable to put his reconciliation of opposites to rest and find a a path whereby his vocation and his asceticism can comfortably coexist, he may never realize his full potential of either.