Artworks Gallery (www.artworksgallery.com) and Design Within Reach (www.dwr.com), the go to source for the best in modern design, will present an exhibition by iconic photographer Michael Brennan and his legendary series on Muhammad Ali, which will include the monumental limited edition photograph entitled “1977.” “1977” will open with a reception on Thursday November 10th 6-9pm and will run through November 17th. The exhibition will then move to the Artworks Gallery in Pasadena where it will be on display through January 17th, 2012, Muhammad Ali’s 70th birthday. 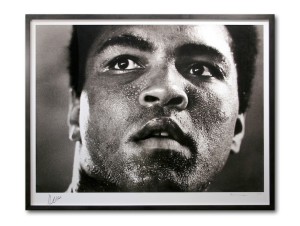 The image is a rare close-up that captures the fighter’s vitality and determination, taken by prize winning British Photographer Michael Brennan. A very limited edition of this print will be available for sale signed by both Brennan and the legend himself, Ali. Six further editions of Muhammad Ali images will be on display and available for sale; many of these are also signed by Ali.

In addition, there will be a very rare collection of Brennan photos on display from a series that were featured in a 16 page featured story in Sports Illustrated entitled “Ali and His Educators” from September, 1980. Brennan, “The Boxing Bloodhound,” traveled extensively to locate and interview these elite few who had actually faced Ali in the ring. His efforts were rewarded with amazing photographs of these sessions and telling testimonials about their experiences with the great fighter.

Most of “Ali and His Educators” are men who have fallen into absolute obscurity since their moment with the most famous boxer of all time. This fascinating photo journal documents these men at very different stages of their lives. With careers varying from a chief of police to a building contractor, a convict to a CEO, they all give an incredible account of their time with Muhammad Ali.

Michael Brennan has photographed some of the most iconic personalities of our time including Queen Elizabeth, Nelson Mandela, Princess Diana, Pele, George Best, Mick Jagger, Jack Nicholson, Mother Teresa and John Lennon to name a few. In 1970 he was awarded with British Photography’s highest accolade “Photographer of the Year,” presented to him by Princess Anne.

A portion of proceeds from the November 10 event will be donated to The Muhammad Ali Parkinson Center (MAPC) and Movement Disorders Clinic.

Design Within Reach is located on 8070 Beverly Boulevard and is open Monday-Saturday 10am-6pm, Sunday 12pm-5pm.