“Some big news coming in the next few days!” 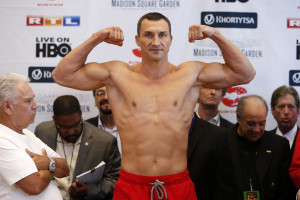 So tweeted undefeated heavyweight kingpin Tyson Fury this week. Yet there was some other big news that rattled the fight world, and that came from the camp of arch rival Wladimir Klitschko, who Fury is supposed to rematch this fall.

“Unfortunately,” Klitschko claimed on a twitter video, “team Fury is trying to change the terms of an already-signed contract multiple times and it is going on endlessly. To protect my own rights and eventually see the rematch, I am forced to go to court.” Add all this to the PED allegations Fury is facing at home in England and it’s clear this is a chaotic time for the man known as The Gyspy King.

In a sense, however, this almost could be seen as par for the course for the enormous Englishman. While it’s no surprise that Fury isn’t afraid to speak his mind, it was notable earlier this year how much weight the guy had gained while enjoying the fruits of his labor after reaching the peak of the heavyweight mountain. What’s more, Fury spoke of losing interest in the sport of boxing. On top of all that, the Klitschko rematch, which was set for this summer, was pushed back after Fury hurt himself in training.

Some are claiming Fury is avoiding the rematch this October. Perhaps this is true, but anyone who followed Fury’s training camp on video this spring and summer would be hard pressed to say Fury didn’t look serious. Indeed, the man took off a ton of weight in a short period of time, seemed to be working very hard and appeared to have his mind in fighting shape. Looks can be deceiving, of course, so it’s yet to be clear what exactly the problem is. Needless to say, queries directed to team Fury and team Klitschko yesterday have so far gone unanswered.

To be sure, this is a match well worth seeing go down. While it’s true, the original fight was a snooze fest for many, it remains one of the biggest upsets of recent times (though not to this author) and fans have a right to be curious as to whether or not Fury’s victory was a fluke, or if Klitschko is truly on the way down as a fighter. It may be easy to write off both men, but their formidable records – Fury is 25-0, while Klitschko is a whopping 64-4 – indicate underrated skill sets. Needless to say, it would be nice to see who the better man truly is in the ring.