The long-rumored Amir Khan sex tape is available online. I haven’t seen it. It was meant to be private, and I respect that.

The tape is reported to depict former world champion Khan video-chatting with a model he dated years earlier. It’s controversial because the model is not his wife, and in it he is naked and performing a sex act.

It is unclear who sold this video to the X-rated website. What is clear is that Khan is no stranger to controversy outside the ring.

In March of 2016, Khan was targeted by a blackmailer who threatened to release a video of Khan and a woman having sex. It turned out the sex tape never existed, and the would-be extortionist was tracked down and arrested.

His recent personal life is marred with infighting between his wife and family. His wife, Faryal Makhdoom, is a fashion aficionado with a cosmetics line. His family is, as Amir is, comprised of devout Muslims. The family has publicly criticized Faryal for dressing provocatively. She has hit back by Snapchatting pictures of her brother in law, naked and drunk. Through it all, Amir and Faryal have stayed together, though he’s recently threatened to walk away from her and the family.

Khan has also long been rumored to appear in other sex tapes, all with women (or a woman) not his wife. One is purported to have been recorded days after the birth of his daughter. Another—the one now available—purports to be weeks after his wedding.

Leaving aside whether his religious and marital obligations are violated, since religious observance and marital monogamy are personal choices, Khan did nothing wrong. He engaged in virtual sexual activity with a consenting adult.

Our prudish culture finds sex to be a lurid topic. Abrahamic religions tend to see sex as something begrudgingly necessary. The media sensationalizes sex and sexuality as something to be gawked at or ashamed of. But it’s the height of hypocrisy—a majority of people engage in sexual activities.

Sex is natural and life isn’t a soap opera. Although celebrities volunteer aspects of their lives to the public, we don’t have a right to the parts of their lives they intend to remain private. We know celebrities to the extent they allow. Fame doesn’t divest someone of the right to respect and dignity with which we’d treat each other. Any more is a violation of the implicit trust in their relationship with the public.

Whether Faryal leaves Khan over this or stays and supports her husband is irrelevant. It’s their personal issue, and we cannot begin to understand the complex motivations and rationale for whatever they decide.

But we have a choice. We can choose to ignore the sex tape. We can see Amir Khan as a great boxer, and not judge him on his personal actions which he never intended to share.

Previous Angel Garcia Melts Down In Rage Filled Rant At Thurman-Garcia Press Conference
Next The Brothers Canizales Put Laredo, Texas on the Map! 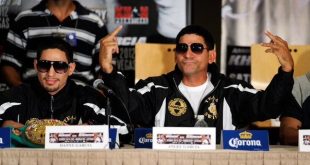