It’s amazing that Bernard Hopkins is still fighting professionally, let alone being the current IBF Light Heavyweight Champion. Yet he continues to beat the odds and his critics by performing well on a world class level. Every time you think his career might be over, he goes out to defy the odds by defeating a much younger opponent.

He’s a living legend and he shows no signs of slowing down.

On Saturday night at Boardwalk Hall in Atlantic City, NJ, Bernard Hopkins will defend his title against Karo Murat. Another Philadelphia fighter, the rugged Gabriel Rosado, will also fight for a world title when he takes on WBO Middleweight Champion Peter Quillin.

Both Rosado and Hopkins will enjoy “home field” advantage, since Atlantic City is only an hour away from Philadelphia.

A preview of both title bouts follows below.

Peter Quillin is itching for a big middleweight title fight. Much is made of the success of Sergio Martinez and Gennady Golovkin, two of the other middleweight title holders, but Quillin should also be in that conversation and would make an excellent matchup for either Martinez or Golovkin.

But the cold war between HBO and Golden Boy Promotions is hurting fighters like Peter Quillin, and he’s left with few attractive options.

Rosado’s record at first glance isn’t pretty. It’s not often you see a fighter with six losses and under twenty five wins getting two title shots within a year. But Rosado’s roller coaster of a career shows one major selling point: His fights are exciting.

Rosado doesn’t have the power of Quillin: he only has thirteen stoppages, which pales in comparison to the twenty-one stoppages of his opponent. But Rosado has been tested, and tested often.

Many ringside observers will note that fighters from the Northeast United States tend to face tougher competition earlier in their careers than most, and Rosado is no different. He’s been boxing professionally since 2006. He lost a close decision to Fernando Guerrero in 2009 in a fight that most felt prior to the fight that Rosado should lose by a wide margin. He has also lost to Alfredo Angulo, Derek Ennis, and Gennady Golovkin.

But it’s been the work of Rosado in recent years that has earned him this title shot. Even though he was stopped by Golovkin, Rosado showed incredible heart and took the best that Golovkin had to offer before his corner stopped the fight. He defeated Charles Whittaker, Sechew Powell, and Jesus Soto Karass by stoppage on the NBC Sports Network, which helped him make his name well known.

But his last fight against J’Leon Love showed Rosado’s true potential. It was a close bout that Love was controlling early, but Rosado knocked Love down in the sixth round and had him back- peddling for most of the remainder of the fight. Rosado lost a close decision on the cards that many felt he should have won, but Love’s victory was overturned due to him testing positive for a banned diuretic.

Rosado is small for a middleweight, but he has the heart of a champion.

Quillin will also have some fans in attendance from nearby New York City. He’s significantly more powerful than Rosado and is a better technical boxer. But Quillin has not been in the physically demanding wars that Rosado has been in.

For a champion, his list of defeated opponents isn’t overly impressive. But his work inside the ring shows his true talent.

He’s had stoppages in six of his past eight fights and made Guerrero look bad while knocking him down four times. Guerrero previously defeated Rosado, and the ease with which Quillin dispatched Guerrero spells trouble for Rosado.

Quillin is solid and will be looking to defeat Rosado in more impressive fashion than Golovkin. But Rosado will not go down without a fight.

Quillin should win on Saturday but it will be much tougher than expected. 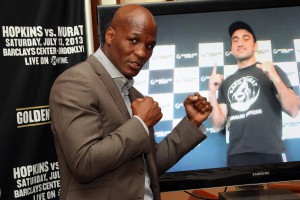 Can Bernard Hopkins do it again against Karo Murat?

This bout was originally scheduled for July 13th, but was pushed back due to Murat having visa issues. Sergei Kovalev was the mandatory challenger for Hopkins’ IBF Light Heavyweight belt, but Kovalev passed on Hopkins to take on and destroy Nathan Cleverly, a man Murat lost to in September of 2010.

On paper, this looks like a bout that Hopkins should win easily. Hopkins, undoubtedly a Hall of Famer, has faced much stiffer competition than Murat throughout his career. A list of his defeated notable opponents would read like a novel, but most recently his victories over Tavoris Cloud, Jean Pascal, and Kelly Pavlik show that Hopkins has discovered the fountain of youth and defies Father Time.

When you see a fighter hit the age of thirty-two, you usually expect him to show some sort of athletic decline. Hopkins is two years away from being a half-a-century old and is showing no signs of slowing down.

Hopkins’ last clear loss was to Chad Dawson in Boardwalk Hall in April of 2012. Dawson was slightly taller, more athletic, and had a slight reach advantage on Hopkins. The only advantage Murat has over Hopkins is that he’s younger than him.

Murat has fought sparingly recently. In fact, he’s only fought once since October of 2011, against an unknown Sandro Siproshvili in Herning, Denmark. His other “notable” victories were over Tommy Karpency in May of 2010 and Gabriel Campillo in September of 2008. He fought Campillo again in October of 2011, with the result this time being a draw.

Quite simply, Murat doesn’t have the experience to hang with Hopkins. The fact that he has not been very active in the past two years does not bode well for Murat.

Hopkins is too experienced, too crafty, and too good to lose to Murat. He also has too much to lose, as a possible mega-payday against Floyd Mayweather Jr. looms on the horizon.

Previous How Good Is Deontay Wilder?
Next Bernard Hopkins to Defend Title Against Mandatory Challenger Karo Murat This Summer