The Greatness of Floyd Mayweather

“He fights as naturally as a fish swims,” said former HBO Boxing Commentator Larry Merchant. “And sometimes that fish happens to be a shark.” 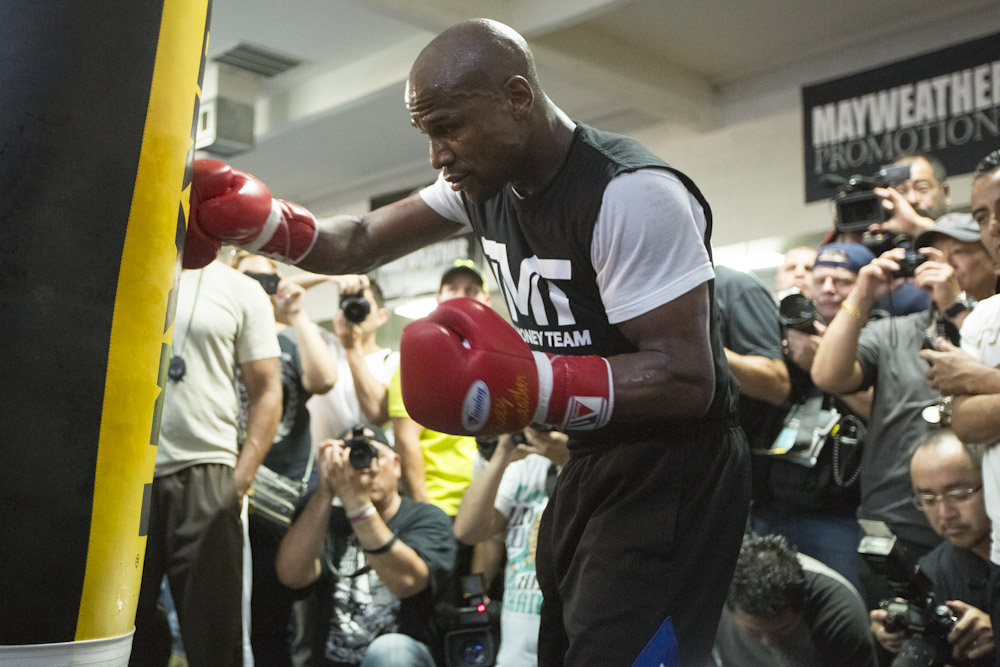 His skill set and talent can’t be denied. The list of accolades and accomplishments speak for itself.

1995 Participant at Featherweight at the World Amateur Boxing Championships

1996 Qualified as a Featherweight for the United States Olympic Team

Major World Titles as a professional:

Although Mayweather was robbed of a gold medal at the 1996 Olympic Games, losing to Serafim Todorov of Bulgaria on points, the prodigy from Grand Rapids left the Olympics with a bronze medal.

Despite that blemish, after making his professional debut in October of 1996, Mayweather captured a world title in his 18th fight and has been a world champion since 1998.

He has a record of 21-0 (10 KOs) in championship fights and his reign as a world champion has spanned across three decades. The only other active fighters who can make that claim are Bernard Hopkins and Manny Pacquiao. But both Pacquiao and Hopkins have suffered defeats during their championship reigns.

Mayweather has captured the lineal championship title in three different divisions and on September 14th, against Saul “Canelo” Alvarez, he aims to capture his 4th lineal title, along with the WBC and WBA junior middleweight titles.

But greatness is not just measured on titles and awards. It’s also about the showcasing of skills and talent. The will to want to be great and surpass your peers. Putting forth the time, possessing a dedication towards your craft and having a tremendous work ethic in order to master every facet of your profession.

By now, most observers have witnessed Mayweather’s skills have been on display throughout his history of fights and are well documented. He is the definition of a boxer.

First thing comes to mind is his defense. The ability to slip punches, roll with punches, give the opponent angles and different looks, his ring generalship and spacing, all of his calculated movements playing into effect.

Mayweather’s accuracy is another trademark and testament to his greatness. It’s a variety of punches thrown that land, in pivotal spots to the body that do serious damage to his opponents. He may not cripple opponents and make them crumble to his will like a prime Mike Tyson back in his day, but Mayweather’s punches are effective.

Combining his defense and accurate punching, according to Compubox, going over his last 10 fights, Mayweather has a plus/minus rating of plus 24. He’s had an average connect percentage of 41% and his opponents have landed only 17% of their total punches against him.

Another trait that comes to mind in regards to Mayweather is his speed. Not just his superior hand and foot speed. Although his physical hand and foot speed and dexterity is comparable to some of the all-time greats of the sport of boxing, his ability to think is his greatest trait.

Intelligence. Some may question his antics outside of the ring. That’s fair game. Inside the ring, he is one of the most intelligent fighters you will ever witness. He appears to be playing accelerated chess while everyone else is playing checkers.

Possessing the ability to adapt to any situation. Having the intelligence and awareness to make adjustments to whatever his opponent is doing.

Adjusting to Zab Judah, who outmatched and exceeded Mayweather’s own speed and athleticism while also fighting out of the difficult southpaw stance. Floyd lost three out of the first four rounds but by round five, figured out the pieces to the puzzle.

He will have to do the same against Alvarez. Canelo, who many consider a boxing savant. An opponent who has the skills to go along with his size.

Canelo is 13 years younger than Mayweather. He is hungry and anxious to prove he is the best fighter in the sport and that his era has begun.

Stepping into the ring, all past accomplishments and accolades are thrown to the back burner. You are only as good or great as your last fight, or as your last day training. What matters now is the moment.

On Sept. 14th, once again Mayweather’s greatness will be tested.