Ronda Rousey finally got a win by something other than armbar. Show casing some new striking skills, the Women’s Bantamweight champ finished her challenger with a brutal left knee to the liver. Rousey retains her title, and looks to be improving her striking offense, while still somewhat susceptible to opponent’s striking. Rousey needs to continue to develop her striking defense, but with her world-class ground game, judo, and evolving striking, she is looking as tough as ever to beat. Starting off the main card, Stephen “Wonderboy” Thompson looked as impressive as ever in defeating Robert Whitaker by TKO in the first round. Thompson looks ready for a step up in competition as he is now on a three fight winning streak in the UFC. Next up, Mike “Quicksand” Pyle crushed TJ Waldburger throughout the course of three rounds, ultimately finishing him by TKO. Herb Dean was late to stop the contest, as Waldburger took a beating from Pyle on the ground before the bout was halted. 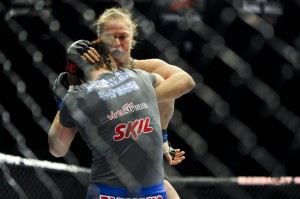 Immediately Maia shoots for a takedown, but MacDonald sprawls nicely. Maia goes for it again, and this time gets the takedown. Maia is in the guard of MacDonald. Maia is trying to pass the guard, but MacDonald is defending nicely. Good elbow from Maia, and is looking a gain to pass. Maia is in full mount now with three minutes to go. Excellent right hands from Maia. Rory is trying to buck him off, can’t do it. More solid ground and pound from Maia, then Rory is able to somewhat escape into half guard. MacDonald is able to regain the guard with one minute to go. MacDonald gets back to his feet, nice leg kick from Maia. Good left hand-right hook combo from Maia. 10-9 round for Maia.

Rory dominating the striking battle, going back to one-two combinations. MacDonald stuffs a takedown, lands a body kick. Maia looks helpless now. Big straight right from MacDonald, denies Maia easily on yet another takedown attempt. Body kick, one-two combination from the Canadian. Maia swings wildly and misses, goes for a takedown and gets shut down. Maia switches to a single, Rory hopping on one leg. Maia gets the takedown with 3 minutes left! Maia trying to pass the guard, but MacDonald neutralizing him well. Maia needs to score points and is not doing so, still stuck in guard, then loses the position entirely as MacDonald gets up. Maia goes for a takedown once again, nothing there. The process repeats itself with just over a minute to go in the fight. Maia is bloodied up badly. MacDonald lands more heavy shots Nasty right hook from MacDonald, Maia looks hurt. MacDonald finishes with beautiful one-two combinations, tagging Maia at will. 10-9 round for MacDonald.

All three judges score the fight 29-28 for the winner by unanimous decision, Rory MacDonald.

Cummins lands an outside leg kick, then a jab. Cormier lands a jab, then they clinch up. Cummins gets tagged by a big uppercut, Cummins trying to fight back, but getting rocked. Cummins running away, swinging and missing wildly. Cormier nails him with a hook, now Cummins is turtled up, getting pounded on by Cormier, and the fight is stopped. Cummins never stood a chance.

McMann landing nasty straight right hands right off the bat. Crisp right hands finding the mark, Rousey trying to clinch up and does. Rousey lands a couple right hands and a knee. McMann fighting back as well with knees. The women are still in a massive clinch war, and Rousey destroys McMann with a left knee to the body. McMann crumbles down, and Rousey starts tagging her with right hands. McMann is turtled up, may have been attempting to get up, but Ref Herb Dean comes in to stop the fight, giving Rousey her first ever TKO victory.

Previous Zou Shiming: Can He Succeed Outside Of Asia?
Next “Solo Boxeo” Boxing Results: Sonoma, Tso, and Murata Victorious in Macau