It’s a fight neither man can afford to lose. This statement applies to all the main bouts which will take place at Wembley Arena on Saturday the 5th on Frank Warren promoted event Gladiators. At Heavyweight, former British and Commomwealth champion Derek Chisora, coming back from a point loss to Tyson Fury, squares off with ex-Southern Area title holder Lanre Olubamiwo, who was obliterated by John McDermott in his last fight ,and both men will be looking to secure their future in the division. Former British Super Middleweight champion Paul Smith gets what could be his last chance to regain his belt against George Groves, who will feel the pressure of having his performance measured against his perennial nemesis James DeGale, who dethroned Smith. Also, middleweight prospect Billy Joe Saunders will fight for his first title when he meets Gary Boulden for the Southern Area crown. But, all the eyes will be on Ricky Burns going into the hardest fight of his career against the fearsome Aussie Michael Katsidis, who, after being stopped by Marquez in his bid for the full title and having lost a decision to Robert Guerrero, will be very determined to regain the Interim WBO Lightweight belt he once owned.

We had a chance to meet both at the official press conference in London today. 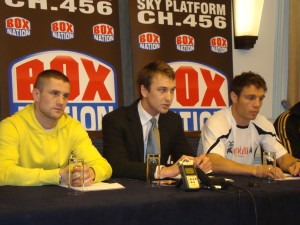 BOXINGINSIDER: What is your answer to the critics who accused you of moving up in weight to avoid Broner, your mandatory challenger at Super Featherweight?

RICKY BURNS: That’s a lot of nonsense. How can they say I moved up to duck Broner when I have a harder fight ahead with Michael Katsidis, who is a much tougher and dangerous opponent? That’s the kind of fights I want, where I am evenly matched.

BOXINGINSIDER: Did you expect to get a title shot so quickly in your new division? Or is it actually the reason why you moved up in the first place?

RICKY BURNS: To win a title at Lightweight was obviously the idea from the beginning. Coming up as a world champion at Super featherweight, I knew I would get a high rank but to fight Katsidis for the Interim WBO title straight away is a dream come true. The chance, though, was offered after we made official our decision.

BOXINGINSIDER: How do you feel about your opponent? Do you think he is shot after so many wars or do you consider it a genuine step up, possibly the hardest fight of your career?

RICKY BURNS: Shot? Not at all. He is for real. I have a lot of respect for him. He comes to fight and has never been in a dull bout.

BOXINGINSIDER: Has anything changed in your training routine at the new weight?

RICKY BURNS: Well, not struggling to make the weight, I did more upper body work in an effort to get bulkier.

BOXINGINSIDER: What is your game plan? Are you going to box or straight into the trenches?

RICKY BURNS: We did a number of different things in the gym, which I am not going to disclose. Once I step into the ring, I will take the fight as it comes.

BOXINGINSIDER: About Lightweight championship fights, how do you fancy John Murray’s chances against Brandon Rios?

RICKY BURNS: It’s a very difficult fight for John, but I am sure he knows what to do and is doing it in training camp. I really hope he pulls it off. 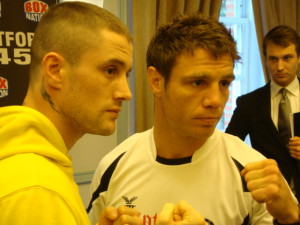 BOXINGINSIDER: What are your targets in the division if you are victorious on the 5th?

RICKY BURNS: I have to get past Katsidis first. I am not looking past that. This is the biggest fight of my career and if I lose it there will be no targets for me to look at.

Unlike Burns, Katisidis is actually moving down in weight for this bout and he does not seem to take the Scottisch champion lightly.

BOXINGINSIDER: Can you explain why you moved back at Lightweight?

MICHAEL KATSIDIS: I thought I could not make the limit anymore, but, as it turned out, I just got a bit lazy. After my last two fights, I realized I am more comfortable at Lightweight. It’s definitely my division.

BOXINGINSIDER: What is your answer to the claims that you are shop-worn after your bouts with Marquez and Guerrero and have been cherry picked for Burns?

MICHAEL KATSIDIS: People who say that should be more realistic and look at the facts, especially at what was I was going through in my personal life at the time of those fights. I bounced back in my last match against Lozada and all the questions will be answered at Wembley on Saturday the 5th.

BOXINGINSIDER: On the other hand, there are those who see Burns as a step down and accuse you of taking an easy fight. How do you rate your opponent?

MICHAEL KATSIDIS: I think he has earned his place up there with the best. When the chips are down, he proved he can deliver. I see this as a very tough fight.

BOXINGINSIDER: What is your game plan? Do you have any surprises in store or will it be war as usual?

MICHAEL KATSIDIS: This is like a poker game and I hold my cards at my chest. I am not revealing anything yet. But, you know, I always end up in brawls…

BOXINGINSIDER: Where do you go from here if you win and where if you lose?

MICHAEL KATSIDIS: I am not looking past this fight. He is too good a fighter. Whoever underestimated him lost.

BOXINGINSIDER: Do you have a personal deadline for retirement? Will your decision be based on age or achievement?

MICHAEL KATSIDIS: Neither, it’s going to be based on performance. When I can’t perform anymore, that’s when I am going to stop.

BOXINGINSIDER: After Kevin Mitchell’s win over Murray, would you consider a re-match?

MICHAEL KATSIDIS: Definitely. I feel England is my home and to keep fighting here would be fantastic. So, a rematch with Mitchell is definitely a possibility.

The press conference was hosted by Frank’s youngest son George Warren, who graciously took some time to discuss both his future plans for the new born Queensberry’s Promotions he runs with his brother Francis and his view on the Gladiators card.

BOXINGINSIDER: Are you here today to represent Warren Promotions of your own Queensberry’s?

GEORGE WARREN: This is a Frank Warren Promotions’ event and that’s who I am representing today, but I work for both companies.

BOXINGINSIDER: Talking about Queensberry’s, how did it feel to get a British title win for your Cuiserweight Leon Williams in only your second promoted event?

GEORGE WARREN: We are over the moon. I don’t think it has ever happened that a fighter who held no major belts before signed to a new promoter and won the British title in his first fight. We are trying to find out if there is a precedent but I don’t believe it has ever been done.

BOXINGINSIDER: There are some of the experts, like Steve Bunce, who believe Norton actually won the fight, though. What is your point of view?

GEORGE WARREN: I agree it was tough to score and many rounds were close, but, overall, Norton approach was mainly negative and I don’t think you get points for that. I think Leon did enough by stepping up the pressure in the last 4 rounds.

BOXINGINSIDER: When will the next Queensberry’s event take place?

GEORGE WARREN: It will be at York Hall on the 18th of November and it will be headlined by Lee Selby defence of the British and Commonwealth Featherweight titles against former champion John Simpson. On the undercard, Cruiserweight prospect Tony Conquest will face Toks Owoh.

BOXINGINSIDER: Is it too early to match Conquest with Williams?

GEORGE WARREN: We would like to see Conquest have one or two fights more, but we don’t think it’s too early. We look after both of them, they want the fight and it would be great for the fans.

BOXINGINSIDER: Going back to Gladiators, do you agree these are make or break fights for the all the bigger names on the bill?

GEORGE WARREN: They are but I don’t think a loss would be too drastic for any of them. There is too much focus on undefeated records these days, but boxing is a tough game and you can’t win all the time. A loss is not the end of the world. Look at DeGale’s come back after the Groves fight, or Kevin Mitchell beating Murray and Murray himself going from a loss straight into a title shot.

BOXINGINSIDER: What are your picks?

GEORGE WARREN: We are fully behind Ricky Burns to beat Katsidis. I sit on the fence for the others, except for Billy Joe Saunders, who I fancy to win.

The whole card will be also broadcasted live on BoxNation (Sky channel 456).