Was The “Gay Marriage” Pacquiao Controversy A Hatchet Job? The Nemesis – Floyd Mayweather

Floyd Mayweather doesn’t seem to want to make a fight with Manny Pacquiao a reality, so he concentrates on being an opponent of sorts outside of the ring.

So it is not surprising that when sparks flew over the misinterpretation of a story run by Granville Ampong in the National Conservative Examiner, where many mistakenly thought Pacquiao called for gay men to be “put to death,” Mayweather felt compelled to be the contrarian. 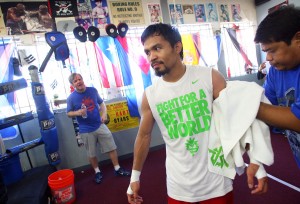 Still about ten days away from starting his jail sentence, he decided that piling on might contribute nicely to a winning public relations strategy. Writing on Twitter, he stated “I stand behind President Obama & support gay marriage. I’m an American citizen & I believe people should live their life the way they want.”

One might opine that his many arrests for assault and domestic violence, including the one that resulted in the guilty plea and the jail term, might constitute violations of the rights of certain individuals, bet we’re assuming that you were aware of that already.

As the Courage Campaign, a gay rights activist group that advocates, among other things, for same-sex marriage, constructed an assassination of Manny Pacquiao, with an excuse that he said things he actually did not say, gratitude in this endeavor was expressed to Mayweather: “This is also a huge step forward to make inroads among what can be a very homophobic community.. We thank Mr. Mayweather for his announcement and support for equality.”

As they were so anxious to find things they could use against Pacquiao for what he represented as his religious beliefs, they didn’t even bother to perform some simple due diligence on someone they had, all of a sudden, cuddled up to.

Last November, Mayweather went on Sirius Radio with a boisterous talk show host named Rude Jude, at the suggestion of 50 Cent, or so he said. Rude Jude set out to confront Mayweather about his inability to put together a bout with Pacquiao. Admittedly he was chiding Mayweather for effect, but Floyd was clearly being rattled.

Throughout the interview he was referring to Rude Jude as a “professional dick rider,” and eventually put an end to the proceedings. before he hung up the phone, he told Jude to “get off my dick and get a new job, you faggot.”

Before the eyes of many on “Mayweather-Cotto 24/7,” the reality show HBO runs to promote its pay-per-view programming, the son (Floyd Jr.) was seen and heard calling the father (Floyd Sr.) a “faggot.”

One cannot imagine these are the only two occasions on which he has used the expression.

Sure, it’s possible that Floyd Mayweather did not use the term in a ‘literal” sense, but instead just threw it out there as an expression – one that may even come out as a reflex, unfortunately. But ask yourself the question: do you think that is something the Courage Campaign, for example, allows for, or do you think that is the kind of thing their organization fights against?

We can tell you that the National Basketball Association doesn’t advocate that kind of language use. As much was confirmed last year, when no less an icon than Kobe Bryant was fined $100,000 for calling referee Bennie Adams a “faggot.” At first, Bryant didn’t realize what the big deal was, but public reaction and the huge fine left little doubt.

David Stern was, well, rather stern with his statement:

“While I’m fully aware that basketball is an emotional game, such a distasteful term should never be tolerated. Accordingly, I have fined Kobe $100,000. Kobe and everyone associated with the NBA know that insensitive or derogatory comments are not acceptable and have no place in our game or society.”

Outsports.com has it listed as #46 on its list of “Most Important Moments in Gay Sports History.” (incidentally, exactly one year ago yesterday, Joakim Noah of the Bulls was caught hurling an anti-gay slur and took a $50,000 fine).

As a follow-up – and you will have certainly seen this if you have seen NBA games this season – they have aired a public service spot, in association with the Gay, Lesbian and Straight Education Network, where it is stressed that using the term, no matter the context, was not acceptable. Grant Hill and Jared Dudley of the Phoenix Suns appeared in the ad, and other NBA players have chimed in with announcements, including Steve Nash.

Mayweather loves to talk about his buddies in the NBA, so it’s hard for us to believe he missed those commercials.

In September of last year, Courage Campaign called for “discipline and a fine” for Philadelphia Flyers right wing Wayne Simmonds, who allegedly called Sean Avery of the New York Rangers a “f**king faggot.” They advised NHL commissioner Gary Bettman to impose a similar penalty to that of Bryant.

But have they ever listened to Mayweather? Or did they even want to, in light of the fact that he was a convenient weapon in the fund-raising campaign built around Manny Pacquiao under a false premise?

It’s likely these people of “courage” took the path of least resistance.