What Now For Nike and Manny Pacquiao?

In the midst of the brouhaha over Manny Pacquiao last week, a petition by the Courage Campaign got image-conscious Nike scared. The company that has an endorsement deal with the fighter obviously got the creeps as to what they thought were incendiary remarks about same-sex marriage on his part, and they were pushed along by the appeal by the LGBT group to end its arrangement with Pacquiao. 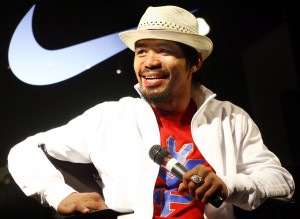 Instead of digesting the clarification that was offered by writer Granville Ampong about his original, poorly-organized story, then defending their athlete, they ran for cover, with the following statement, delivered by Mary Remuzzi, a company spokesperson:

“Any recent remarks made by Manny Pacquiao reflect his personal views. Nike is strongly opposed to discrimination of any kind and has a long history of supporting and standing up for the rights of GLBT individuals.”

Acknowledging that gays and lesbians are part of the audience that buys sneakers, they decided to distance themselves, at least as it was a convenient time to do so, while staring 25,000 signatures in the face.

Is that out of character for them?

Well, Nike is indeed known as a company that is friendly to the LGBT community. In fact, there is a Nike Lesbian, Gay, Bisexual, Transgender & Friends Employee Network, where the mission, as it states on the company website, is “To increase awareness and understanding of Nike’s gay, lesbian, bisexual and transgender community through the promotion of various educational and supportive events.”

As far as steering clear of controversy is concerned, well, let’s just say they are practical about it.

Reportedly, Nike cut Tiger Woods’ deal from $20 million in 2009 to $10 million going forward, citing all his extra-marital escapades. And they even introduced a new set of golf clubs that for the first time did not have his name attached to it. But they didn’t abandon him, as did Gillette, Gatorade and Accenture. One wouldn’t think that was just “punishment,” though some in the sports marketing world have a different perspective. Though his circumstances are quite different than that of Woods, Nike has not abandoned Pacquiao either, although they could have offered stronger support, inasmuch as there wasn’t really anything he did that warranted punishment.

Part of Nike’s sponsorship strategy is focused on associating the company with top athletes, even if it is not a sport they necessarily will release a lot of sales from. In some cases, they can create a whole product line around a superstar, as they did with Woods (Nike Golf sales peaked at $725 million in 2008), but in the case of Pacquiao, it was the opportunity to latch on to the most marketable figure in what is a worldwide sport, not to mention someone ranked #33 on Forbes Magazine’s recently-released “most powerful celebrities” list. They know they’re not going to go too far with Nike boxing gloves, for example, but his celebrity has a presence just about everywhere, and there is tremendous value to be found there. In addition, Nike enjoys actually receiving feedback from the athletes themselves, as well as getting them to beta test the products, and Pacquiao has been somewhat useful in that regard. he has been seen, for example, demonstrating the company’s sensor-filled shoes, which it feels will eventually have a great influence on the way people work out.

Obviously there has been a mutual benefit to the relationship in terms of sheer marketing. Certainly an athlete is endorsing the brand, but the brand is also validating the athlete to some degree. It is a status symbol to be a “Nike athlete,” and in many respects, Pacquiao was “edified,” not only by his relationship with Nike, but with some of the other companies he’s involved with, such as Hewlett-Packard. In other words, he reached an even higher level of marketability.

To have any controversy at all surrounding Pacquiao is a case of awkward timing for Nike. For one thing, they have literally wrapped themselves around the June 9 fight against Timothy Bradley, to the extent that they have also made a deal, albeit a minor one, with Bradley. And on May 18, just as all the confusion about Pacquiao’s remarks about same-sex marriage was starting to get cleared up, the company was launching the Nike Air Trainer 1.3 Max Manny Pacquiao (that’s a sneaker, by the way), retailing for $170, which includes all the Filipino colors. There’s always a lot of merchandise connected to Pacquiao, and more comes out with each of his fights. When he steps in the ring, it is treated like a special occasion by the company; such “event marketing” can’t happen along the same timetable with a baseball, football or basketball star.

Are those special occasions drawing to a close? They could be, for a number of reasons. One is that Pacquiao is reportedly considering a move to Jordan Brand, which admittedly is a division of Nike but does not carry the Swoosh, but instead the “Jumpman” logo associated with long-time Nike athlete Michael Jordan. Even though Nike would continue to reap some of the benefits, it would still be looked upon as a disappointment of sorts for them.

Also, we still don’t know what is going to come of Pacquiao’s ongoing tax case in the Philippines, where authorities from the Bureau of Internal Revenue (BIR) are adamant that they will continue to pursue their efforts with PacMan regarding the disclosure of documents that are necessary in determining his 2010 tax liability. There is the possibility, distant as it might be, that jail time could await him if this got further out of hand. Also, there is the matter of Pacquiao’s “pact with God,” in which he has vowed to retire sometime soon. Whichever way you look at it, out of the ring he will have less impact.

And even though Pacquiao has a connection to basketball by virtue of his ownership of a hoops team in the Philippines, who knows whether a deal with the Jordan Brand would even go through at this point. Jordan himself is notoriously noncommittal when it comes to political issues; who can forget his famous line, “Republicans buy sneakers too”? And make no mistake about it, Pacquiao’s religious views bleed over into the political arena, even more so in the Philippines than they do here in the U.S. And part of that is a no-compromise stand against abortion.

You know, women buy sneakers too.