Why Do So Many Show Disrespect for GGG?

Why Do So Many Show Disrespect for GGG?

This writer had a GGG NO. 1 shirt made up and it’s almost like I had something against Floyd Mayweather, Jr., the way so many walk away from me in disgust. First thing out of their mouths is “he ain’t fought nobody”. As they walk away I sometimes yell “Mayweather’s retired!” How do you knock 36-0 (33), with 23 straight knockouts and still going? 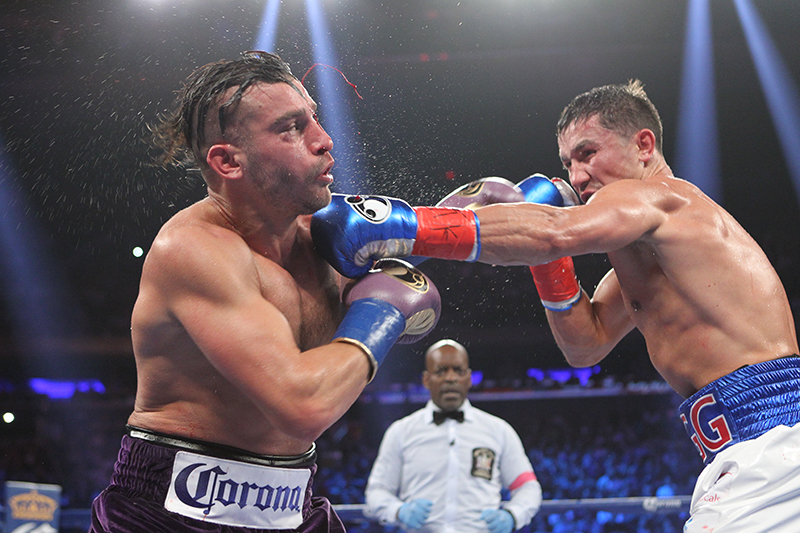 I hate to tell them but Gennady “GGG” Golovkin has the IBF, WBC, WBA and IBO belts and he didn’t steal them. In the case of Danny Jacobs who has turned down a meeting with GGG I won’t believe it until I see them in the ring together in March. Same for Canelo Alvarez putting off their fight for a year!

Well known Philly trainer Naziim Richardson told me “the man has great balance and can punch from any angle”. That is rare, believe me. “Bozy” Ennis whose son Farah was in camp with GGG knows what’s going on.

Philly boxer Dhafir Smith has been to camp twice with Andre Ward and once with GGG. He wouldn’t make a prediction but said it would be one interesting fight.

After seeing the Ward-Kovalev fight that Ward forced 46 clinches in a 36 minute fight. Go to www.youtube.com and see what I mean. Seemed he brought his own referee.

I admit I haven’t seen much of Ward since he turned professional but if his performance against Sergey Kovalev is an example of his talent then how could he even be mentioned in the top 10 P4P? He should have been DQ’d but didn’t even have a point taken away.

The greatest boxer P4P that ever lived was “Sugar” Ray Robinson. Not Floyd Mayweather, Jr., Pernell Whitaker or even “Homocide” Henry Armstrong.

Give credit where credit is due!

Previous Boxing Insider Notebook: Wilder, LaManna, Rabii, Spadafora, and more…
Next Why Carl Frampton Is Not My Fighter Of The Year