Win, lose or draw Timothy Bradley will not get his respect

He’s just one of those athletes who may not be appreciated till he is gone. There are guys like LeBron James, Kobe Bryant who have their legion of fan boys and detractors. At the end of the spectrum, most people can at least appreciate their craftsmanship. 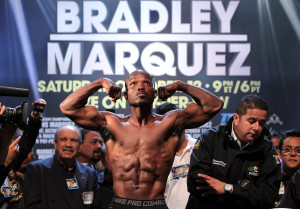 In boxing, Floyd Mayweather, Manny Pacquiao, the Miguel Cotto’s of the world have their fair share of haters and fan boys alike, but at least for the most part there is a level of respects from most of observers for each of these fighters.

In Timothy Bradley’s case amongst many fans and media members alike, Bradley doesn’t even get that respect. The lack of respect Timothy Bradley has received from fans and members of the media is a dark cloud that has followed the champion from Palm Springs throughout his career.

He’s like the Larry Holmes of his day. Holmes felt during his career, he wasn’t given his proper respect as a champion and that feeling of the lack of respect would haunt him throughout his career.

When Holmes defeated his boxing hero Muhammad Ali, most people viewed his beating of a past prime Ali as a despicable act instead of a passing the torch moment.

Because Ali was so beloved by most fans and media members, the beating of Ali was also held against Holmes. Holmes also came into the scene at a bad time, where a lot of the great heavyweights of the 70’s were fading and he was also an outspoken fighter.

Bradley can say some things that do not always sit well with the fans, like his thoughts about Pacquiao, Oscar De La Hoya or thoughts about boxing judge C.J. Ross.

His style is not all too pleasing to the casual fan because he lacks punching power. In 30 fights, all victories by the way, he only has 12 KO’s. But defeating multiple champions despite lacking punching power should demonstrate his strong desire to win.

You would think with his defensive deficiencies and the vulnerability to his chin, in which can create exciting theater, he would have more fans. That kind of trait should endear him to some people. Especially since he finds a way to win despite being hurt.

Even with his story on how he rose from the ghettos of Palm Springs. He’s a hardworking family man, with a clean record and is one of the rare fighters on who can be looked to as a good role model.

But the lack of respect is still prevalent.

Bradley’s lack of respect intensified after his controversial victory over Manny Pacquiao, with many fans and members of the media commenting on how the split decision victory in favor of Bradley, was a disgusting, horrible decision and a black eye for boxing.

The fight itself and how you interpret is up for debate. With or without the Pacquiao victory, Bradley has amassed a solid resume.

He captured world titles in multiple divisions, has established himself as an elite fighter over the past five years and defeated top tier opposition.

He was the No. 1 Junior Welterweight in the world, moved up in weight class and defeated one of the top-two Welterweight and P4P fighters in the world Manny Pacquiao, and he was not even in the top five ratings for his own division after that performance according to “The Ring.”

Bradley is ranked No. 8 in “The Ring” Top Ten Pound for Pound rankings. Again, how is Pacquiao and Adrien Broner ranked ahead of Bradley?

Broner is a fighter with a lot of upside and talent, but he still has a lot to prove. Facing better opposition will answer a lot of questions in regards to Broner’s talents and will also solidify his top ranking on the P4P list.

In regards to Pacquiao, Bradley moved up in weight and defeated one of the best fighters in the sport and he can’t even crack the top five on the P4P list. The guy he beat is ranked ahead of him in the P4P rankings despite getting knocked out in his last fight and not having a significant win over a quality opponent in years.

Bradley has expressed his frustration in regards to the lack of respect across various interviews and even on the HBO series 24/7 series.

If Bradley loses to Marquez, many people will proclaim Bradley as a fake champion who was never any good to begin with.

If Bradley beats Marquez, people will say Marquez was too old and slow, (which may actually be the case) or they will not give any kind of credit to Bradley despite the fact Marquez is coming off the biggest win of his career.

He’s penalized because he does not have the flash or flair of a Mayweather or Pacquiao. His will and determination is undeniable. He should be celebrated for the amount of courage he has shown in his fights, especially in his last outing against Provodnikov.

But instead there are comments like “Bradley was given another gifted decision, he’s a fake champ!” or “He can’t fight the Russian Provodnikov toe to toe because he knows that he is weakening on 11th round and 12th round! hahahahaha! I have a lot of respect for the Russian side because he will never get a knockdown!”

Either way, the fight between Juan Manuel Marquez and Timothy Bradley should produce a classic between two extremely talented fighters, both possessing an undying will to achieve victory by any means. Respect should be given to both combatants win, lose, or draw.