Kell Brook And Amir Khan May Meet In Ring

Kell Brook And Amir Khan May Meet In Ring

Surprise, surprise, welterweight Amir Khan finally seems interested in getting in the ring with countryman and fellow welterweight Kell Brook. The IBF world titlist of the division, Brook has long wanted a fight with Khan, but the former Olympian has remained aloof, acting as if Brook was either not good enough or not popular enough for the two men to actually face off. All that has apparently changed, however. Indeed, both Khan and Brook took terrible beatings this year at the hands of men in higher weight classes – Khan to Canelo Alvarez and Brook to the feared Gennady Golovkin. Both men got a lot of good will from fans for you their efforts, but also probably got some serious headaches, as well. 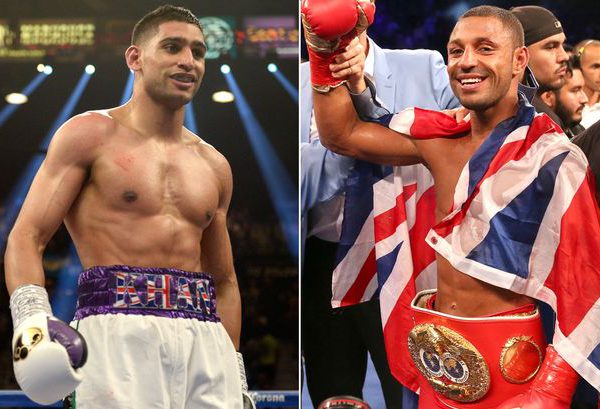 Make no mistake about it, though, these two are still both big names and a bout between them would be very huge in England. To be sure, it would generate a lot of interest internationally, as well. For both men are top level welterweights, Khan with his blinding speed and Brook with his strength and skill set. Should the match come to fruition, it would be a must-see event for fight fans. No one is saying a deal has been made, however. What’s more, complications may arise if these two fighters do indeed decide to meet in the ring.

Still, Sky News reports matchmaker Eddie Hearn “admits talks are well underway.” Indeed, Sky reports that Hearn “believes the deal could be done in a few weeks.” That would make for yet another solid fight in what’s shaping up to be a quality counterpoint to what has been a beyond-frustrating 2016 for fight fans. Sure, good matches were made and fought this past year, but long blackouts, behind the scenes BS and a general lack of competitive flair left the boxing public high and dry. If Khan-Brook can be added to the likes of Garcia-Thurman, Joshua-Klitschko and GGG-Jacobs, 2017 would be off to a solid start indeed.

Again, though, there are other matters afoot. For starters, rising American star Errol Spence Jr is in line to face Brook for Brook’s IBF strap. Brook may well have to give that title up if he forgoes Spence for Khan. Then, of course, there’s the matter of how each of these men will look in the ring after their last fights. Again, both Brook and Khan took terrible beatings their last time out. The shot that Canelo finished Khan off with was truly frightening while Golovkin literally made Brook need surgery after their throwdown.

Still, it’s the gusto both of these men bring to their careers that makes a potential fight between the two particularly exciting.

Previous Ronda Rousey Returns After “Biggest Upset in Combat Sports History”? Not By a Long Way
Next How Mixed-up Are the Heavyweight Champions?