Manny Pacquiao to have the greatest comeback ever?

Flashback to 2012, Manny Pacquiao along with Floyd Mayweather, was standing atop boxing’s landscape as the best fighter in sport. 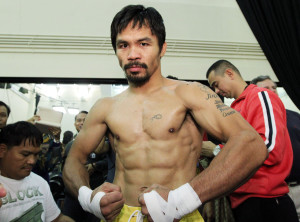 Leading into the year, he had come of a victory over faded future Hall of Famer Shane Mosley and he scored majority decision over long-time arch rival Juan Manuel Marquez. Pacquiao was heading into the year potentially seeking an elusive fight with Floyd Mayweather, all while running for office in his native Philippines.

But things did not go as planned. Although Pacquiao did attain success in regards to his political aspirations, he did come across some speed bumps in his professional boxing career. Suffering an upset, split-decision defeat to Tim Bradley, followed by a devastating knock out defeat by his arch-rival Juan Manuel Marquez, left the eight division champ in disarray and put him on the shelf for most of 2013.

In his comeback attempt in November of 2013, Pacquiao did score a unanimous decision over Brandon Rios. But his upcoming fight on April 12th of this year will be Pacquiao’s true test.

This is a great fight for Pacquiao, the best fight that can be made for him at this point. With the cold war brewing between his promotional companies Top Rank and rival Golden Boy, there’s not a wide selection of opponents to choose from for Pacquiao.

Under the Top Rank banner there is former sparring partner and current WBO Junior Welterweight Champion Ruslan Provodnikov, a Brandon Rios rematch or maybe Mike Alvarado. Not too much interest in any of those fights.

There is a course a fifth fight with Marquez, but we’ve seen that episode too many times already and Marquez is not likely to accept a fifth fight with his longtime rival. Marquez feels he beat Pacquiao in their first three encounters and the knockout he delivered in their fourth fight was icing on the cake.

Fights against Mayweather, Danny Garcia, Amir Khan and some of the other notable fighters surrounding the division appear to be out of the mix because of Pacquiao’s promotional ties with Top Rank. Unless he can find a way to severe ties with Bob Arum, which does appear unlikely.

But with that said, that leaves the option of Tim Bradley, which happens to be the best choice for Pacquiao anyway. And to his credit the fight was made, for April 12th for Bradley’s WBO Welterweight title.

The first encounter was controversial, with most spectators believing Pacquiao won the fight. How you personally score the fight is up for interpretation. I thought it was a closely contested fight, which was marred by the incorrect analysis of HBO commentators.

The biased commentary can manipulate viewers, it can especially influence crazed fans into seeing something different than what is actually transpiring inside the ring and can even influence writers such as Ivan Goldman.

There can be a case made for either fighter winning the fight.

Pacquiao has the faster hands, definitely had the more eye catching, aesthetically pleasing style and his power punches seemed more damaging. However, Bradley did slip a lot of punches displaying defensive prowess, counter punched effectively and outworked Pacquiao, especially in the later rounds.

The commentators failed to comment on Bradley’s surprising display of defensive skills and unexpected counter-punching abilities. His tenacity and ability to throw punches in flurries, while displaying the courage to outwork Pacquiao despite his injuries, went unmentioned by the analysts.

An immediate rematch would have been ideal to settle the score or to make amends for the first fight’s decision, but for whatever reason the rematch did not materialize until now.

Either way, this is a big fight for Pacquiao. This could be one of the biggest wins of his career and probably his most important to date.

Bradley is the breed of opponent that Pacquiao has not faced in quite some time. Bradley is an elite level fighter in his prime, who happens to be a couple years younger and is on the same plane as Pacquiao in regards to athletic ability.

This is a great challenge for Pacquiao, who does have the punching power and style to pull off the victory. This is the most intriguing fight of the year so far without question. Both fighters are highly motivated and have a lot at stake.

Bradley wants to prove he truly earned his victory in the first fight and wants to demonstrate it was not a fluke.

Pacquiao wants to reestablish himself as the dominant fighter in the sport and wants to lure in Mayweather for the lucrative showdown in the future.

If Pacquiao beats Bradley and by some miracle happens, he is able to get a fight with Mayweather later in the year and beats him as well, without question Pacquiao would be a lock for “Fighter of the Year” and “Comeback of the Year.”

It would surely be one of the most memorable resurgences in recent memory and would only add to “The Legend” that is Manny Pacquiao.

Previous Enough with the Pacquiao-Mayweather Nonsense Already!
Next Interview with Juan “Baby Bull” Diaz: The Fighting C.E.O. of the Baby Bull Empire