Marquez-Bradley Undercard: A Night of Boxing Firsts: the undercard

Marquez-Bradley Undercard: A Night of Boxing Firsts: the undercard.

Boxing is not a sport that is shy when it comes to defying convention, although don’t count on mainstream media sources ever acknowledging this fact. In a sport that is almost universally regarded as being, to some degree, immoral and corrupt—it must be said that boxing is not afraid of breaching social barriers. After all, boxing was the first major sport in America to break the color barrier with Jack Johnson winning the heavyweight championship in 1908, some 37 odd years before Jackie Robinson would enter a major league field. Boxing, at least in America, is also a sport that is almost exclusively dominated by African American and Latino fighters—and has been since at least the 1960’s. This Saturday the Juan Manuel Marquez vs. Timothy Bradley PPV undercard will make history in its own right when Orlando Cruz (20-2), the first officially open gay boxer, fights for a vacant WBO featherweight title against division stalwart Orlando Salido (39-12). The card will also feature the debut of the much heralded two-time Olympic champion Vastly Lomachenko. Shockingly, and defying long held traditional standards, he will make his pro debut against a ranked contender Jose Ramirez (25-3) in a full ten round bout. Together Lomachenko and Cruz make this one of most novel undercards in recent memory.

In the last 20 years, and especially within the millennial generation, America has undergone a gradual thaw towards its prejudicial stance against homosexuality. We have seen many celebrities and public figures reveal their sexuality to the world in order to decrease the stigma. Akin to the racial desegregation of the 1960’s much of this revolution took place on television, with networks like MTV and sitcoms like Will and Grace taking the forefront in the effort to mainstream something that many people, shamefully, had a great deal of trouble excepting. However, the sports world is different story—as it is a realm consumed with machismo and masculinity, with no sport perhaps more graphically than boxing. Just watch the harrowing documentary Ring of Fire, which chronicles the ring death of boxer Penny Parret after he made a homosexual insult towards Emile Griffith at the weigh-in, and Griffith’s subsequent life long struggle to come to terms with both the death and his own sexuality. It is so poignant that it has, without question, entered the lexicon of great pieces of art associated with the struggle for gay rights, outlining just how difficult and dangerous overcoming cultural barricades can be. With that in mind, it makes Cruz’s decision to come out publically all the more commendable and brave. Social impact aside, it must be said that his fight with Salido is nothing spectacular—as Cruz is a solid professional but has been knocked out in both of his loses against Daniel Ponce De Leon and Cornelius Lock, and Orlando Salido is on the tail end of what has been a long and battle filled career. However, it is hard to criticize Top Rank for wanting to give, what is a significant milestone in the social history of boxing, its own significant spotlight. Both fighters have action-oriented styles so it should be a decent scrap to watch and sets up a match with the winner of the other undercard bout. 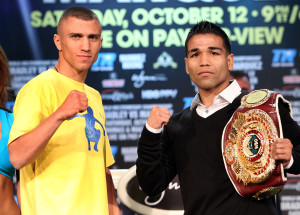 Within the hardcore realm of boxing’s subculture Vasyl Lomachenko is a full-fledged urban myth. This is largely because he fought so many of his amateur fights in obscure locations around the globe, outside of the bright lights of television. Many fight fans have only had the chance to see him fight at his two Olympic performances, where it became nakedly obvious that he was finest boxer alive wearing a headgear and a vest. Many fans, including myself, lamented the fact that we would probably never see him box in the professional ranks. However, in a trend started with the singing of Cuban Guillermo Rigondeaux by Top Rank, we have seen many recent signings of seasoned amateur stars from countries that have traditionally bypassed the pro game. Zou Shimming, a Chinese flyweight and fellow two-time Olympic gold medalist, has recently grabbed headlines by fighting his first two pro bouts on major cards in Macau, China. So far the reviews have been subpar at best because Shimming’s style is so distinctly molded in the rhythms of the computerized amateur boxing style and has drawn sharp scorn from boxing pundits who feel his large paychecks and headline status has been unmerited. It has started a contentious debate between professionalism vs. amateurism, and merit vs. propaganda.

Fortunately, Lomachenko fights in much more fan friendly style, as he is known for his all out aggressive attack, body punching, and flamboyant footwork. Lomachenko is also taking on a bold strategy by facing a really solid professional, Jose Ramirez, in just his first pro fight, and, if victorious, intends to fight for a title in his next. He might be biting off more than he can chew, but with an amateur record of 396-1 (yes, that’s not a typo) it’s not hard to understand his confidence. It sets a bold new president for what kind of opposition debuting fighters can or should be expected to face.

Some people may chastise this undercard for being more of a publicity stunt than a quality line-up, but you can’t fault Top Rank for their creativity. After all when is that last time you saw an openly gay boxer and two-time Olympic gold medalist fight on the same show? I guess by Sunday morning we will know whether the strategy worked, but in the mean time it makes for excellent supposition. In the end, history—whether you feel it is large or small—will have been made.