Do you know how long is 50 years? It’s 5 decades, half a century, or in other words just a really long time. Let’s put it this way. In the early 1900s the life expectancy for a human being was roughly 47 years. In short, 50 years can feel like a life time.

It isn’t easy to do anything for that long of a time period. Let alone being a boxing promoter???

The life of a boxing promoter is a short lived one. Putting on great shows, signing fighters and staying relevant is a difficult thing to do. For promoter Russell Peltz, he has managed to accomplish all of the above. This Friday night on October 4th, 2019, Peltz will be celebrating his 50th year in the sport of boxing with a show in his hometown of Philadelphia, Pennsylvania, in the 2300 arena. 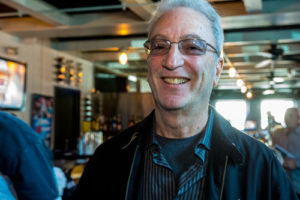 Throughout the career of Peltz he has seen it all. From the most obscure fighters to the most world renowned in Muhammad Ali. Boxing has been apart of Peltz life since he can remember. He has produced more than a thousand shows in his long and illustrious career.

For a man that has been through it all in boxing and has reached the mountain top, Peltz has never forgotten the long road he took to get here. At the age of 72, Peltz can recollect just about everything in his boxing career. Including, when he first fell in love with the sport.

“1959,” said Peltz regarding his love affair with boxing. That is when I first fell in love with boxing. I was 12 years old. It was like love at first sight. Growing up I wanted to be a sports writer so I took journalism in college and began my path to making my dreams come true.”

If anyone has ever chased their dreams, no matter if it is in professional sports or something completely different, then you would understand just how much of a grind it is in order to make those dreams come true. Peltz was no different.

“I remember working at a newspaper named the Bulletin and I did the midnight shift. I would work there from midnight until 8 in the morning and straight from there I would head to school from 9 until 1 in the afternoon. It may seem like a lot of work for some people but I was enjoying what I was doing and I was making pretty good money as well.”

No matter how much we believe we can something, we all have the tendency to change our minds don’t we? What was supposed to be just a career in journalism took a bit of an unexpected turn in the life of Peltz.

“There was a time where I wanted to be the boxing writer for the paper. That was my goal in life but the boxing writer at the time had gotten an extension at a time where I thought he was going to retire and I remember thinking to myself, do I want to sit around and wait until this guy dies? I would just watch the clock while I was working and I thought did I really want to just watch the clock for my entire life? I didn’t. I quit shortly after.”

With the help of his many connections, the life of a boxing promoter began shortly after. To the surprise of many, possibly even Peltz, he enjoyed success at an early age but more than anything, there was a sense of fulfillment in the work he was doing.

“When I started promoting I was 22 and no one was doing that so I got a lot of publicity for it. We had some good fighters coming up in the Philadelphia area. Willie Monroe and Cyclone Hart were big time fighters out here. I ran about 15 shows in 7 and a half months. The money wasn’t great but I was enjoying what I was doing. As long as I was able to support myself and do what I loved to do then I was okay with that.”

Throughout the career of Peltz he has managed to see just about every all-time great fighter. Muhammed Ali, Marvin Hagler and countless others have came across his Philadelphia ring. With so many outstanding fighters in his presence it would be difficult to choose who was the very best wouldn’t it? For most of us, including myself. Ali would immediately come to mind, but not for Peltz.

“Ali was great. He was truly an amazing fighter, he is right up there with the best that I have ever seen but I would have to place him number two behind Carlos Monzon. The guy had almost a hundred fights and only lost three of them. He was one of the best fighters ever and personally, he was the best that I had ever seen up close.”

For Peltz he has been able to see boxers from many generations. A common discussion in the world of boxing is too compare eras. Don’t bring Peltz into that conversation. It is one that he has a difficult time indulging in.

“The eras will always influence how a fighter fights. If you take a guy like Mike Tyson and place him in a different era than he would have fought some what similar to the guys of that era. That’s why it is difficult to compare eras. Some guys look at the old school fighters and think that they wouldn’t be able to compete in certain eras but that isn’t true. Guys just fought differently in the eras that they were apart of. Guys also. fought every month back in the day. Fighters today fight just about twice a year so it’s a difference. Would the guys of today be able to fight as many times as the guys did before them and still be able to hold up physically? That’s the question. Guys are bought up with much easier opposition. The best thing to me is to fight an undefeated fighter because 9 out of 10 times he can’t fight.”

Peltz has nothing against a fighter with an undefeated record but he does believe that it can be a bit over blown. It isn’t simply about the records. It should only be about if the guy can actually fight.

“The TV people don’t want the best fighters,” said Peltz when discussing the issue that certain networks have with a fighter. “They want guys with the best record.”

Even without the backing of certain networks, Peltz has continued to put on shows with the sort of fighters that would fail to get recognition in any other circumstances. For his 50th anniversary show, the main event will feature a fighter with a record of 8 wins against 2 defeats. It will also have plenty of fighters with similar records. To Peltz, it isn’t about the record. He was grown up in a time where non of that really mattered.

“There were so many guys who were great fighters but didn’t have perfect records. Some of them didn’t even have particularly good records but still won at the highest levels. Freddie Pendleton won a piece of the lightweight title and he had over 25 losses in his career. A guy like Buster Drayton had numerous losses but he managed to perceiver and win titles as well. There is just too much of an emphasis placed on the win, loss record. I have a fight on my anniversary show where a guy is 0-2 and the other kid 1-4-1. I know it’s going to be a terrific fight. Those kids deserve a platform because too often they are served up as fodder. They get paid more then they usually would to get destroyed by an up and coming prospect. When that happens enough times they just retire and the talent pool gets even thinner. There has to be a platform for kids who are 8-4 who fights another guy who is 6-3 and it is entertaining fight. There has to be an outlet for those kinds of fighters.”

Peltz has successfully created that platform for these fighters. He doesn’t just want to fixate his attention on the undefeated prospects who are destined for greatness. Instead, he has placed an emphasis on fighters who are constantly overlooked to find a home.

Even with the success that Peltz has enjoyed, he still has his hands in the pot of many other ventures in the boxing world as well.

“I’m advising fighters and match making for shows as well. I just want to make competitive fights so that the people in the audience who are paying outrageous amounts of money to go see a fight get their money’s worth.”

Previous Gennady Golovkin and New Trainer Jonathan Banks Search for their Rhythm Together
Next Shields vs. Habazin Fight Preview